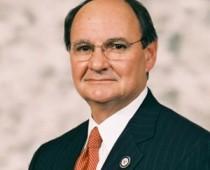 Adley has arrived
It hasn’t been an easy tour of duty with the Bobby Jindal administration for Benton state Sen. Robert Adley.  A lifelong Democrat, he switched to the Republican Party in December 2007, a month before Jindal took office as governor.
Adley, saying he shared Jindal’s conservative philosophy, was hoping that the party switch would land him a leadership position with the new Republican governor.

It didn’t happen. Adley became a thorn in the governor’s side, fighting for more transparency in the governor’s office.  Jindal was not pleased, and Adley spent Jindal’s first term on the outside looking in.
But 2012 is a whole new ball game for Adley, thanks to the governor tapping longtime legislator John Alario, R-Westwego, to be Senate president.
Adley and Alario go way back to their days in the House.  Adley was a state representative from 1980-1996, and Alario served in the House from 1972-2008.
That friendship has apparently paid off for Adley.  He was appointed by Alario to be chairman of the Senate Transportation, Highways and Public Works Committee.  But it didn’t stop there.
Alario has appointed Adley as one of the five Senate members to the Legislative Audit Advisory Board, the 10-member House-Senate   panel that oversees compliance of state audits.
And Alario has retained Adley as chairman of the Senate Select Committee on Veterans Affairs, the committee that studies and addresses the needs of military families in the state.
So after four years on the sidelines in the Jindal administration’s first term, Adley has emerged as one of the most influential state senators for his third and final term, which began in January of this year.

Crawford for Congress?
Brian Crawford, former Shreveport fire chief and currently the city’s assistant chief administrative officer, is a name that is frequently mentioned among politicos as a potential future candidate for elected office.
As was noted in another article, his name is prominent on the political rumor mill as a potential candidate for Shreveport mayor in 2014.
But informed sources report that he is being courted by the Democratic Party as a possible opponent for incumbent 4th District Republican U.S. Rep. John Fleming of Minden.  Fleming will be seeking a third two-year term this fall.
It is no secret that the Louisiana Democratic Party has focused on Fleming’s seat as a potential pick-up for the party in 2012.
The first name mentioned as a possible opponent for Fleming was attorney Kyle Robinson of Bossier City.  However, he has apparently taken himself out of consideration.
Now the attention has turned to Crawford, sources say.  So much so, that the Democratic Congressional Campaign Committee in Washington, D.C. is involved in trying to convince Crawford to run.
Crawford told the Fax-Net: “While I would be humbled for any national party to consider me a worthy candidate, ultimately, it would be the great people of our City, District, and/or State that would be the ultimate influence on any decision I would make, now or in the future to seek elected office.”
He added, “It is in that light, of local interest and growing concern, that I am presently evaluating the level and quality of representation we currently and have experienced in Louisiana’s 4th Congressional District.”
One Democratic official opined that if the party will ever have a shot at defeating Fleming, this year is it for more than one reason.
The overall approval rating of Congress is at 10%, a historic low, with the approval rating of Republicans being lower than the rating of Democrats.  The latest polls give Democrats a 32% approval rating compared with 20% for Republicans.
Perhaps more importantly, this fall Democratic President Barack Obama will be on the ballot, which should bring out a heavy vote among loyal Democrats, especially blacks.
Democrats harken back to the fact that Fleming defeated Democratic candidate Paul Carmouche in 2008 by only 350 votes out of 92,572 cast.  And the election was moved to another date other than the presidential election because of problems caused by hurricanes in the state.
Democratic officials believe if Carmouche had been on the ballot with Obama, he would have won.  The new district lines, created by the required reapportionment after the 2010 Census, are more favorable to a Democrat than in 2008, Democratic officials believe.
One thing is for sure.  If the Democratic Party convinces Crawford to run, it will have to get him out on the campaign trail sooner than later.  The 4th District includes all or part of 13 parishes.
And, the party better be ready to initially put at least $1 million in Crawford’s coffers.  As we know, Fleming, a doctor and businessman, has deep pockets, and the Republican Party will definitely step in to help him retain his seat.
It would likely create a scenario for a very expensive race, akin to the one that occurred between Fleming and Carmouche in 2008.

Walker weighs in
The Fax-Net’s discussion last week about the Bossier City mayor’s race in April 2012 got some reaction – as expected.
Mayor Lorenz “Lo” Walker wanted to leave no doubt in anyone’s mind that he will seek a third term.  He says he is definitely running and that he will be 79 – not 80 – at re-election time.
One Bossier City insider said that Walker is “fit as a fiddle” and in good health and that age will not be a factor for the retired Air Force colonel.
The source also proclaimed that Walker is highly respected and has done an excellent job as mayor.  That respect was on display when he won 91% of the vote in his initial run for mayor in 2005 and by the fact that he was unopposed for a second term in 2009.
It was also confirmed that City Councilman Don “Bubba” Williams is “considering” a run against the incumbent Walker.  But Williams has not made any public declaration that he will run.
If – and when – the mayor’s seat becomes open, our insider says that a name always mentioned as a potential mayoral candidate is   Bossier City Marshal Lynn Austin, who has served in more than one city position.
Austin is a former police chief, and he was the  chief administrative officer for Walker until he was elected city marshal.  No doubt an opening for the mayor’s job will bring forth several other candidates.

More in this category: « Who's to be blame for Louisiana's budget sorrows? Pinsonat: Scoring Jindal on state retirement-pension, education reforms »
back to top