The big debate: Who Won the Arizona GOP CNN Debate? 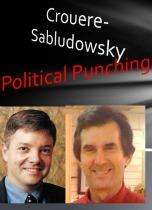 Both answered the same questions after that debate.  Here are their responses:

Question one: Whom do you believe won the Arizona debate?

I would rank the debate winners in this order: Gingrich, Paul, Romney and Santorum. Clearly, Gingrich came off the best with witty responses to some questions, as well as hard hitting attacks against Obama.  Paul made a sensible case for his libertarian philosophy regarding Iran, wars, federal government role in education, etc. Romney got the better of Santorum in several exchanges and seemed more in command. Santorum came across as nervous and slightly unlikable in several responses.

Since the media focused almost exclusively on Romney and Santorum, it is no surprise that most analysts saw Romney as the winner. I agree with that analysis.

Question two: What do you believe was the most important moment in the debate?

The most important moments occurred when Santorum admitted he voted for Title X funding, which included Planned Parenthood, and No Child Left Behind, which expanded the federal government's role in education.  He made a comment about taking one for the Republican team and making a mistake. Clearly, voters don't want a teammate, they want a leader. It did not look particularly good.

Question one: Whom do you believe won the Arizona debate?

Although many political pundits have picked Newt Gingrich as the winner of the Arizona debate, last night, I believe looking at the “big picture”,  the winner actually was Mitch Romney.

Without question, Newt Gingrich came across as the most entertaining and certainly the most erudite candidate. Should he prevail with the Republican nomination, I believe and always have said that Gingrich would be able to take it to President Barack Obama better than the other candidates. Last night, Gingrich reaffirmed this belief.

However, because Mitt Romney did very well and his major opponent right now Rick Santorum did poorly, I believe Romney should be cast as the ultimate victor. One debate does not win or lose an election but in terms of the GOP presidential nomination, the CNN debate could be somewhat of a “game-changer”. The very likable and personable Santorum needed to continue the incredible momentum he has gained since winning the Missouri, Colorado and Minnesota trifecta recently. For him, coming in last, the odds are now against his romping in Arizona, Michigan and in the big kahuna, Super Tuesday.

Question two: What do you believe was the most important moment in the debate?

The most important moment of the date was when Rick Santorum explained why he voted for certain legislation on matters he has often said he was against.

Santorum, said he had voted several years ago for the No Child Left Behind education legislation even though he had opposed it.

His response to some crowd boos was "Look, politics is a team sport, folks".

Santorum's strength and his weakness centers upon his unshakable views.  The social-conservatives love him because he is talking their talk. Others fear him believing that he is an extremist. When responding to a question regarding what single word described him the best, he said “courageous”.   Now, others might have a contrary viewpoint.

For those who wanted Santorum to be the candidate who would not abandon his position when the strong political winds blast, he showed that, at least in the past, he was a good team player, an insider, and was willing to play the political game.  Compare him to Ron Paul who at least is consistent with his views even as is fast becoming a Presidential campaign fixture and political gadfly.

If Romney and Obama have been called the flip flopper's (which I believe is a good description for some of their political decisions) last night, Santorum now could be tagged with the label, “flop-flipper”.

I believe the Republicans need to congeal around a candidate as quickly as possible. We have seen 20 debates so far. President Obama, with all of his abilities to raise enormous campaign cash, could not buy the type of advertising he has been getting from the GOP presidential campaign.

Instead of the focus being on president Obama who certainly has too many negatives, the center of attention has been on the goofs, the guffaws, the blunders and the inconsistencies of the Republican candidates.

The party deserves better and it actually has better than what it is currently being fed with this election campaign.

Santorum’s winning by speaking for spiritual majority in cultural war

What are your views?  With whom do you agree the most?  Talk about it below:

More in this category: « President Obama is no Democrat, 99% sure Landrieu Says USPS Closing In New Orleans Ill-Informed »
back to top