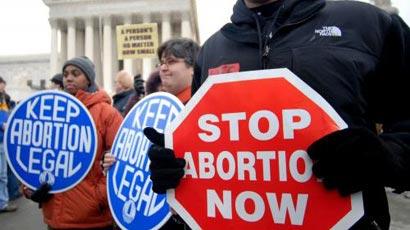 Today, approximately 400,000 pro-life activists are gathering in Washington D.C. to protest the 40th anniversary of the Roe v. Wade Supreme Court decision, which legalized abortion throughout the nation.

The march is usually held on January 22, but was moved to January 25 because of the presidential inauguration. In contrast, the pro-abortion rallies assembled by the National Organization of Women always attract a much smaller crowd.

The pro-life turnout is typical of the crowds that are attracted each year to the nation’s capital to demonstrate against the Supreme Court decision. Sadly, the march is usually ignored by the mainstream news media.

No other march attracting so many participants is given such scant media coverage. For example, the New York Times has refused to cover the rally for the last five years and other major media outlets have enf
orced a similar news blackout. Another way the media shows it bias is to refer to the movement as anti-abortion instead of pro-life. The media does not like using the “life” word in describing this debate because it is somehow demeaning to the abortion proponents. In reality, millions of Americans fervently believe that abortion is the taking of a human life that begins at the moment of conception.

This type of treatment shows the bias of the media and the belief of some opinion makers that this issue is settled. In reality, there is currently a very slight pro-choice majority on the Supreme Court. Yet, if one more conservative justice is appointed, the highest court could overturn Roe v. Wade.

Currently, the issue is still the most divisive one in the country. Not surprisingly, neither presidential candidate stressed the issue in the last election. However, the pro-life Republican candidate Mitt Romney should have highlighted his position more prominently in the last election.  An August 2012 CNN survey showed that “some 62 percent want abortions illegal in all cases or legal only in certain instances while just 35% want abortions legal for any reason.” So, America is a majority pro-life country, but Romney decided to forgo social issues and only emphasize the economic problems of the country. His disastrous decision is clearly a major reason why the Republican turnout was depressed and Romney ultimately lost the election.

Romney’s hesitation is typical of many politicians who want the issue to just disappear. However, refusing to discuss abortion does not limit the ever growing death toll. In the past 40 years, there have been over 54 million abortions in this nation, which is equal to about one-sixth of the total population of the United States. Americans were rightfully outraged that 20 children were massacred in the Sandy Hook shooting, but it is amazing that the murder of so many children each and every day is allowed in this nation.

It is time to put an end to this American tragedy. Of course the mainstream news media does not see this issue the same way. As noted by Dan Gainor of the Media Research Center, “We accurately describe the horrific loss of 6 million Jews as a Holocaust. But to the American media, 54 million dead is “value neutral.”

The death toll needs to end, so the fight to overturn Roe v. Wade must continue. Eventually, our country will recognize no one has the right to take an innocent life, as it is a gift from God that must be cherished and valued.

For almost the first 200 years of our nation we understood these values, but, sadly, we have lost our way in the few decades.

It is time that Roe v. Wade was consigned to the dustbin of history where it belongs.

More in this category: « Jindal's Republican Keynote speech follows Court ruling against his governmental reform Kennedy: Questions to ask about Jindal’s tax reform for Louisiana »
back to top