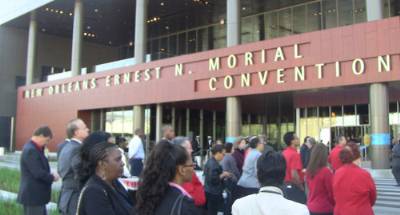 The ceremony marked the completion of the 24-month, $52 million renovation of the former Hall A and La Louisiane Ballroom. The space has been re-configured into The Great Hall, a 60,300 square foot column-free ballroom, which is now the largest ballroom in New Orleans. The renovation also includes a 4,660 square foot “junior” ballroom with a roof-top terrace, named “The Rivergate Room,” and 25,000 square feet of pre-function space. The first official use of the Great Hall will be as the site of the NFL Store during Super Bowl XLVII.

More in this category: « Kennedy: Questions to ask about Jindal’s tax reform for Louisiana New Year's Eve in New Orleans events: A blast »
back to top