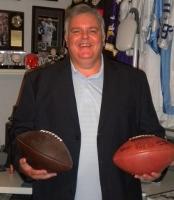 Has the New Orleans Saints “bountygate” revealed a crack in the NFL?

A schism in the reality in which the game is being played?

Is the NFL now becoming a touch-football game or the Touch Football League rather than  sport of Dick Butkus, doomsdale defense, Purple people eaters of the past.  Defenses that would tear their opponents apart without concerns about the niceties we are seeing on the playing field today?

How did the Gregg Williams pay-for-hit go unnoticed, or did it?

Below is Part I of a multi-part series interview with Detillier:

Detillier discusses how the NFL game has changed from a sport of “big hits” to one where the league, by protecting the players’ safety   are morphing to game to one of rules, fines and apprehensions about harming the other players.

Detillier recalls his conversation with former defensive-coordinator Gregg Williams at the time when he had just taken the job with the Saints.   Detillier describes what Williams said and how that comment would foreshadow current events.

Detillier describes the current and future damages to the sport as a result of the NFL Bounty scandal.   He said you can expect lawsuits and perhaps even IRS probes including actions by the NFL’s commissioner Goodell.

Mike Detillier is the editor and publisher of Mike Detillier's NFL Draft Report. Since 1985, Mike has done scouting and research on the top college football players available for the annual pro draft.

For the past two decades, Mike has been the college and pro football analyst for WWL 870 AM Radio in New Orleans. He reports on all areas of the college and pro football world and co-hosts the popular Monday Night Second Guess Show. Mike was first teamed up with legendary New Orleans sportscaster Buddy Diliberto and now co-hosts the show with former New Orleans Saints quarterback Bobby Hebert. He also has been part of the New Orleans Saints Sunday morning pregame show for the network.

In addition to his weekly work for WWL 870 AM, Mike has also been used as a college and pro football analyst for a wide variety of shows across the country including spots for All Night with Jason Smith on ESPN Radio, The Herd Show with Colin Cowherd on ESPN Radio, The Todd Wright Show on Sirius Satellite Radio, the Tennessee Titans Radio Network and the Sporting News Radio Network.

Greg Williams Gets The Hit, What About It Peyton In New Orleans SaintsBountygate?

More in this category: « The Louisiana Putz and Breitbart, The Last Tweets Gregg Williams To Appear Before NFL For New Orleans Saints Bounties Scrutiny »
back to top