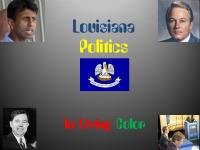 Louisiana is a state with a troubled history of political corruption and cronyism. While our state is blessed with abundant natural resources, wonderful people, a great culture and of course fabulous cuisine, it is also saddled with a woeful history of politicians who exploited the state for their personal gain.

With better political leadership, Louisiana would be in much better economic condition today. Unfortunately, our population is stagnant and our state has lost one quarter of its congressional delegation in the last two decades. Why have businesses and people left? One major reason is our corrupt political system.

Look at the recent media coverage. As our former Governor finished his prison term, a plethora of other Louisiana politicians faced indictments and prison sentences. A former congressman awaits his appeal process and a possible thirteen year prison sentence and many of his family members and close associates have also been convicted.

One of our major problems is that Louisiana does not have an independent legislature. The Governor wields way too much power in our state from controlling the budget to picking the leaders of the legislature. Without checks and balances, the Governor reigns with almost absolute power and that inevitably leads to corruption. When Governor Bobby Jindal chose former Edwin Edwards confidante John Alario as the State Senate President, some good government advocates were outraged.

Yet, it was not surprising, realizing that Jindal only cares about his personal political agenda, not ideology or conservative principles. Alario will help his agenda sail through the Senate. The House will follow suit, under the leadership of another Jindal selection, as few lawmakers will have the courage to tangle with a Governor who controls the budget and how much money will flow into their districts.

Jindal wants to convey an image of a Governor in charge, as this will burnish his national political reputation. Thus, he will be in better shape for a potential GOP vice presidential bid or a cabinet post in a Republican administration. As Jindal pursues his national goals, he has been exposed as a thin skinned politician who will not tolerate any dissent. Just ask former Executive Director of the Governor’s Office of Elderly Affairs, Martha Manuel. The Governor moved her department into the State Department of Health and Hospitals without giving her any input. When legislators asked her under oath in a committee hearing about her opinion of the move, she said it would be detrimental to the elderly. She was fired by Jindal the next morning for giving honest answers to a legislative committee. Obviously Jindal wants his administration to sing the exact same tune regardless of personal opinion, the facts or their duty to tell the truth.

As American Press columnist Jim Beam noted, Manuel was “unceremoniously fired via a phone call from Tammy Woods, Jindal’s community programs director.” Sadly, this is not the only instance of the Governor squelching First Amendment rights.

As reported by Chad Rogers of the Dead Pelican, the LSU System President John Lombardi issued a “gag order” forbidding any system employee from expressing grievances about budget cuts. He said the Governor “would appreciate” no complaints from any of the serfs who toil in any of his universities. While our state universities supposedly teach about freedom of speech and constitutional rights, they obviously don’t exist in our state government.

According to legislative and political watchdog C.B. Forgotston, “Jindal and his minion Lombardi have effectively disenfranchised a class of people in Louisiana from exercising their rights as granted under the First Amendment to the U.S. Constitution.”

While some of the Governor’s reform proposals may benefit the state, his power hungry actions are very troubling. In our state, healthy debate is essential and all sides need to be heard. Committee hearings must include honest testimony from government officials, rather than talking points from the Governor’s spokesperson.

While Huey Long left an unmistakable imprint on the state with his vast array of capital projects, he also left an unfortunate stain of political corruption. Today, as our state tries to recover from its sordid political past, the last thing Louisiana needs is another Huey Long.

-- Jeff Crouere is a native of New Orleans, LA and he is the host of a Louisiana based program, “Ringside Politics,” which airs at 7:30 p.m. Fri. and 10:00 p.m. Sun. on WLAE-TV 32, a PBS station, and 7 till 11 a.m.weekdays on WGSO 990 AM in New Orleans and the Northshore. For more information, visit his web site at www.ringsidepolitics.com. E-mail him at [email protected]