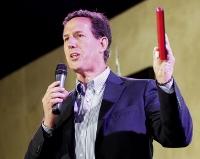 “Well, I think you hit a reset button for the fall campaign….Everything changes, it’s almost like an Etch-A-Sketch. You can kind of shake it up and we start all over again.” Eric Fehrnstrom, Romney Campaign Communications Adviser, CNN interview Wednesday March 21, 2012

In the wake of Fehrnstrom’s gaffe, the stock price of Etch-A-Sketch has soared. Newt Gingrich and Rick Santorum have been bringing the classic children’s toy to campaign stops throughout Louisiana.

Once again, Mitt Romney has to address concerns that he is a flip-flopper who will revert to moderate positions once again in the general election.

The slip has overshadowed good news for Romney this week. After winning the Illinois primary, Romney has approximately half of the delegates he needs to win the Republican nomination. This week, he received an endorsement from former Florida Governor Jeb Bush and a virtual endorsement from U.S. Senator Jim DeMint (R-SC) who practically recommended that Rick Santorum and Newt Gingrich withdraw from the race.

The Republican establishment is rallying behind Romney more than ever. The insiders and power brokers in the party want the nomination contest to end, so the party can focus on beating President Obama in November. While the party bosses see the contested primaries as negative and preventing the electorate from uniting behind Romney, their favorite candidate, who they favor as the eventual nominee, the majority of Republican voters disagree. A prolonged contest allows voters in all states to participate in nominating a candidate, not just the early states like Iowa and New Hampshire.

Conservative voters continue to be distrustful of Romney and for good reason. These voters comprise the majority of the Republican electorate and they want a candidate who stands firm on principle and will not be swayed by the liberal media or the institutional forces of political correctness. What they see in Romney is the direct opposite of this ideal. On practically every issue, he has changed his position. He is campaigning as a conservative now, but called himself a “progressive” when running for office in Massachusetts. Today, he claims to love Ronald Reagan, but while campaigning in Massachusetts he vowed never to “return to Reagan-Bush.”

When he finished his term as Governor, he left Massachusetts with a big deficit after raising taxes and supporting liberal policies such as abortion, cap and trade and socialized medicine. It makes no sense for the Republicans to nominate a person who held similar positions to Barack Obama on a range of issues. In the fall election, all Obama needs to do is revisit Romney’s previous record and show his obscene policy changes.  He will tell voters that Romney’s healthcare plan was his model. He will say that he agrees with the Massachusetts version of Romney, the one who believed in abortion, gay marriage and global warming.

It is really amazing that 16 months after the Tea Party ushered into power a Republican Congress, the candidate with the fewest ties to that group is being pushed toward the nomination by party leaders.

Jeff Crouere is a native New Orleanian and his award winning program, Ringside Politics,” airs locally at 7:30 p.m. Fridays and at 10:00 p.m. Sundays on PBS affiliate WLAE-TV, Channel 32, and from 7-11 a.m.weekdays on WGSO 990-AM & www.Wgso.com. He is a political columnist, the author of America's Last Chance and provides regular commentaries on the Jeff Crouere YouTube channel and on www.JeffCrouere.com. For more information, email him at [email protected]crouere.com

More in this category: « New Orleans Saints Not Sapped By Bountygate, Payton Now The Cause Blind Lady Justice Sick After Seeing Prosecutorial Misconducts »
back to top