Females Abort GOP, Tea Party Due To War On Women 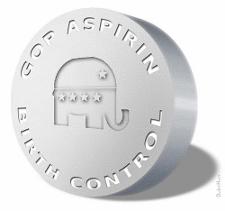 i’ve been professionally involved in politics for over 20 years and the stench coming from our so-called leaders on the right this year is the worst in my lifetime. middle aged white men daring to pretend that only they know what god wants are hell bent on inserting themselves into the beds, bodies and personal lives of every living american. the latest victims of their moral hypocrisy are your wives and daughters. women are fed up with the republican taliban and are seeking a divorce. their children are crying “please mommy, make the bad men stop!”

if teabag nation doesn’t like being accused of waging a war on women maybe they should stop proposing, and sometimes passing some of the most oppressive legislation since the inquisition. the good news is that they are sowing the seeds of their own destruction, if democrats can find their butts with both hands long enough to run even a half-baked campaign highlighting some of the most sexually fascist legislation ever conceived, no pun intended.

as i always tell you dear readers, don’t just take my word for it. even fox news has acknowledged the republican war on women and their anti-woman vagenda: http://www.foxnews.com/opinion/2012/03/15/yes-there-is-republican-war-on-women-voters/

but fox doesn’t stop there: the latest fox news presidential poll conducted march 14th and with a margin of error of only 3% shows that republicans are going down in flames against obama, and the main reason is that women are fed up with the republicans in droves.

the poll reveals that regardless of which of the three-headed gop sexmonster romney/santorum/gingrich faces the president, because of the national republican insanity regarding womens health, obama now has been handed, on a silver platter, a solid 20% lead among women voters.

but don’t give the teabag-evangelical candidates for panderer-in-chief all the credit.  the butt-kissing for the evangelical fringe vote is reflected at the state level as well as in d.c.

every item i’m about to mention is absolutely true. i say this in advance because you might be inclined to not believe how just how depraved and indifferent to womens’ health and rights these guys have blatantly become:

-the republican governor of pennsylvania has advised women to “just close your eyes” when forced to have state mandated intrusive ultrasound exams against their will.

-in georgia, a teabag lawmaker wants to officially remove the word “victim” from rape victim reports. seems being raped once isn’t enough, he wants them humiliated a second time when they have the courage to come forward.

-teabag evangelical congressman have forwarded a bill that would let hospitals refuse on moral grounds to save a rape victim’s life rather than perform an abortion necessary save her.

-more teabag congressmen in d.c. propose cutting a billion dollars in pre-school funding: their defense, on the record, has been that the mothers should be at home taking care of their kids instead of working and enrolling them in preschools.

-and while the gop offers bills to eliminate funds for family planning, republican dan burton has offered a bill to provide CONTRACEPTION…FOR HORSES.

congratulations, women. in teabag evangelical heaven, livestock now have more rights than you.

the nuts have learned nothing from rush limbaugh’s humiliating self-immolation, calling women who use contraception ‘whores’ and ‘sluts’. they’ve learned nothing from the outcry against and crippling of the komen cancer foundation after teabag infiltrators succeeded in politicizing what had been an organization more concerned with womens’ health than a religious/political agenda. they’re having their fun now, but this fall they will pay the price for their arrogance.

case in point: after texas governor and teabag/evangelical presidential flameout rick perry championed a new state law forcing draconian changes in women’s reproductive health care, just the other day women flooded his facebook page with hundreds and hundreds of posts asking him for his professional opinion on womens’ menstrual issues!

even though perry’s staff…no pun intended for the third time in this article...repeatedly removed the entries and eventually closed down the page for a time, someone did capture one set of the postings and they are really bitingly funny and scathing, while making a serious point at the same time. if you are so inclined feel free to check them out here:

so, until election day, what’s left is for us to express our “condomnation” of their attempts at banned parenthood, oppose gingrich’s next unnatural defense of multiple-marriage act, and when someone tries to do an invasive ultrasound to show their power over a women’s health care options, just kick that probe-ation officer in the family jewels and tell him that their attempts at sexual demagoguery and hypocrisy leave a vitter taste in your mouth.