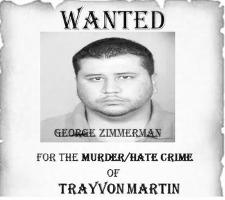 On Wednesday, Florida prosecutor Angela Corey announced that George Zimmerman has been charged with second degree murder in the death of Trayvon Martin. He was arrested and taken to prison where he will remain until an arraignment and bail hearing on May 29.

Zimmerman’s lawyer, Mark O’Mara, hopes to get his client released on bond at the next hearing, and will also try to find "a place for him to be safe.”

Zimmerman has been the subject of death threats and a captured “dead or alive” bounty issued by the New Black Panther Party. Just this week, former heavyweight boxing champion Mike Tyson said that “it’s a disgrace he (Zimmerman) hasn’t been shot yet.” To make matters worse, celebrities like Roseanne Barr tweeted Zimmerman’s address to her 110,000 Twitter followers urging them to take action. These are basically calls for mob justice. It is no wonder that the George Zimmerman and his family have been in hiding. Sadly, the Justice Department and Attorney General Eric Holder have done nothing as more and more people incite violence in this case. Holder is obviously too busy to attend to these matters, but is not too busy to attend an event with the notorious Reverend Al Sharpton and shower the race hustler with unwarranted praise.

In her comments to the media, Corey said that she prayed with the Martin family and was in close contact with their attorneys. Her press conference had the feel of a political speech rather than an announcement of a decision in a criminal justice case. According to Corey, “we do not prosecute by public pressure or by petition.” However, it seems that is exactly what happened in this matter.

This is not how our criminal justice system should work. Prosecutors should not base charges on political pressure, but, instead, they should be guided by the facts. Unless Corey has evidence that is unavailable to the public, Dershowitz is exactly right, nothing justifies this charge.

In this next phase, it will be almost impossible for Zimmerman to receive a fair trial with all of the publicity in this case. While this case was showered with media attention, carnage on the streets of America is completely ignored. Every week, hundreds of Black youths are killed by other Black youths throughout this country and there is no outcry, no attention. The publicity seeking reverends and the media do not show up.

What made this case so interesting was the racial component.  It was the supposed bombshell that George Zimmerman was a “White Hispanic.” This contrived term was used by the New York Times and other media outlets because Zimmerman has a White father and a Hispanic mother. In their long history, the New York Times had only used the term “White Hispanic” four times before the Zimmerman case. Once they used it, other media outlets piled on to emphasize the racial angle. To be consistent, the media should now exclusively refer to President Obama as “White African American.” Of course, that will not happen as the President is always referred to as “African American.”

If Zimmerman had been African American or Trayvon Martin was Hispanic or White, this would have never surfaced as a national story. On the other hand, if Zimmerman had made the news for doing something positive, such as saving a child from a burning building, he would have surely been labeled “Hispanic.”

In this case “White” is used to stir the racial pot and create more tension. It is typical of a media that is biased, liberal and irresponsible.

Jeff Crouere is a native of New Orleans, LA and he is the host of a Louisiana based program, “Ringside Politics,” which airs at 7:30 p.m. Fri. and 10:00 p.m. Sun. on WLAE-TV 32, a PBS station, and 7 till 11 a.m.weekdays on WGSO 990 AM in New Orleans and the Northshore. For more information, visit his web site at www.ringsidepolitics.com. E-mail him at [email protected]">[email protected].

Judge in George Zimmerman case offers to recuse herself

Talk about this below...Click LOGIN WITH FACEBOOK (You will be logged in) AND TELL US BELOW HOW YOU FEEL ABOUT THESE ISSUES. YOUR COMMENTS WILL APPEAR ON YOUR FACEBOOK PAGE. ALSO, IF YOU LIKE THIS COLUMN, PLEASE HIT THE RECOMMEND BUTTON BELOW AND/OR USE THE SOCIAL MEDIA BUTTONS. THANK YOU.

More in this category: « Louisiana's retirement system needs reform Did Louisiana lawmakers double-dip with ALEC, legislative reimbursements »
back to top