Mixing religion and US politics can be hazardous to your beliefs 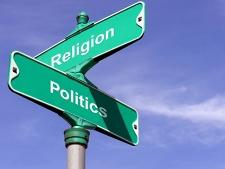 I have a request of all of our pontificating politicians.  Leave God and me alone to work out our relationship.  I consider myself a religious person, but I don’t wear my faith on my sleeve or preach to my neighbors.  I have a “comfortable” relationship with the Good Lord.  But it’s personal.  It’s private.  And I want to keep it that way.  Political battles are not going to lead any of us to salvation, but that message seems to be lost on Republican and Democrat politicians alike.

American politicians, today, are saturating their rhetoric with religious references for the purpose of bolstering a particular political point of view. Andrew Sullivan, writing in the London Sunday Times, laments that: “On one side, the Republican base is made up of evangelical Protestants who believe that religion must consume and influence every aspect of public life. On the other side, the last Democratic primary had candidates profess their faith in public forums, and more recently President Obama appeared at the National Prayer Breakfast, invoking Jesus to defend his plan for universal health care.”

According to a recent Pew Research poll, some 60% of Evangelical Christians support the use of torture against suspected terrorists. Among all regular once a week church goers, the approval rate of torture was 54%.  And according to last week’s Rasmussen poll, 55% of Americans think hate is growing in this country. What gives? Why have so many mixed their political rhetoric with their religious beliefs?

In many instances, Christians point to the New Testament as the source for their beliefs on numerous public issues. Whatever happened to, “Render unto Caesar the things which are Caesar’s, and unto God the things that are God’s” (Matthew 22:21)?

I’m a Thomas Jefferson fan and can make a compelling argument that he was America’s most outstanding President.  Jefferson was surprisingly private concerning his religious beliefs, but was a professed Christian and studied the Bible extensively.  His personal Bible is currently on display at the Museum of American History in Washington, D.C.  What is unique about it is that that it has been carefully razor cut with a series of small sections missing. Jefferson cut out what he believed to be the actual teachings of Jesus “and pasted them into a slimmer, different New Testament.”

Jefferson made clear his purpose.  “We must reduce our volume to the simple evangelists, select, even from them, the very words only of Jesus.” He was hoping to end up with “the most sublime and benevolent code of morals which had ever been offered to man.”  And in his fine tuning of the biblical passages, Jefferson discovered the simple Jesus that so many with political agendas either have missed or purposely ignore.

Jefferson’s premise was simple. Why does religion have to be made so complicated?  If one is a Christian, doesn’t it all boil down to the two — the only two — basic premises taught by Jesus  — believe in a Supreme Being, and do good works?  That’s it. That should be what faith is all about and nothing more.

And such faith is the same foundation for not only Christians, but for Jews and Muslims alike –  the simple acts of believing in the Supreme Being and helping those in need. But too often, internal strife within the hierarchy of many denominations continues to divert attention from these two basic premises of believing in God and lending a hand.

Both Jews and Gentiles seem to regularly convene synods to create more religious red tape. Recently, the Vatican reprimanded America’s largest organization of Catholic nuns, the Leadership Conference of Women Religious, charging them with promoting programs with “radical feminist themes” that are incompatible with doctrine on women’s issues. Jewish leaders have criticized the Catholic Church for a recent decree that declared Pope Pius XII lived a life of heroic virtue. Religious denominations seem to be bogged down in often conflicting doctrine that strays from the church’s primary mission.

Sullivan, by the way, also feels that politics and religion, like oil and water, do not mix well.  And he wonders if many religious denominations are straying from their basic goals.  “The saints, after all, became known as saints not because of their success in fighting political battles, or winning a few news cycles, or funding an anti-abortion super PAC. They were saints purely and simply because of the way they lived. And this, of course, was Jefferson’s deeply American insight: ‘No man can conform his faith to the dictates of another. The life and essence of religion consists in the internal persuasion or belief of the mind.’ ”

Remember the Waylon Jennings song called Luckenbach Texas? The key line is “maybe it’s time to get back to the basics of life.”  No one is going to find salvation by carrying on political battles.  There is nothing wrong with picking a good political fight and going to the mat for a worthy cause, philosophy or a candidate. But the effort should be secular. When the political smoke clears, winners can crow and losers can lick their wounds. Then it’s time for both sides to go back to the basics. The simple obligation of acceptance and commitment. Believing in a higher being and offering a helping hand.  Why do we make it all so complicated?

This is my simple religion. There is no need for temples; no need for complicated philosophy. Our own brain, our own heart is our temple; the philosophy is kindness.

Jim Brown’s syndicated column appears each week in numerous newspapers and websites throughout the nation.  You can read all his past columns and see continuing updates at www.jimbrownusa.com. You can also hear Jim’s nationally syndicated radio show each Sunday morning from 9 am till 11:00 am, central time, on the Genesis Radio Network, with a live stream at http://www.jimbrownusa.com

Want to know more about politics and religion?  Find it here on Amazon.com

The Righteous Mind: Why Good People Are Divided by Politics and Religion by Jonathan Haidt (Hardcover - Mar 13, 2012)