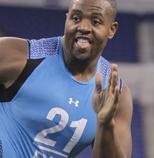 The Saints made a risky gamble in selecting defensive tackle Akiem Hicks with their first pick in the NFL Draft on Friday night.  In fact, one publication columnist from Bleader Report has already given their top draft choice, an F grade.

The Saints selected Hicks with the 89th pick in the third round. He's out of Regina in Canada which means the 6-foot-5, 300-plus pound guy didn't play against elite competition, but he has a tremendous upside, and he was recruited by LSU out of Sacramento City (Cal.) Community College in the fall of 2009.

He enrolled at LSU in the fall of 2009, meaning he would have been a fifth-year senior for the Tigers.

But Hicks received impermissible transportation and lodging during an unofficial visit and then during the summer spent in Baton Rouge prior to his enrollment at LSU, as well as a number of impermissible phone calls from then receivers coach D. J. McCarthy. While the violations would eventually cost McCarthy his job it cost Hicks his eligibility.

McCarthy also set Hicks up at apartment of a former Tigers football player that summer, another NCAA violation. The pair would later mislead compliance officers when asked where they had been staying.

LSU self-reported the violations to the NCAA in 2010 and self-imposed the loss of two scholarships in 2011 and was placed on a year of NCAA probation  and a reduction in official visits for two school years.

Hicks, hurting from the LSU experience, went to Canada to play football and McCarthy went to Florida to coach high school football.

The Saints have a great history of discovering gems (Jimmy Graham, Jahri Evans and Marques Colston) later in the draft. The Saints  took a risk with Hicks, but it might pay off.

The Saints don't have much behind defensive tackles Sedrick Ellis and Brodrick Bunkley and Hicks could end up in the rotation sooner than expected for a developmental player.

And the Saints are betting their latest major business decision will risk pay off regardless of the risk.

Read all about the New Orleans Saints

Home Team: Coaching the Saints and New Orleans Back to Life by Sean Payton and Ellis Henican

From Bags to Riches: How the New Orleans Saints and the People of Their Hometown Rose from the Depths Together by Jeff Duncan and Trent Angers (Dec 1, 2010)

More in this category: « Spell New Orleans Saints Draft 2012, Y-U-C-K TSA sexual gropes of Kissinger, Geraldo, others getting out of hand »
back to top