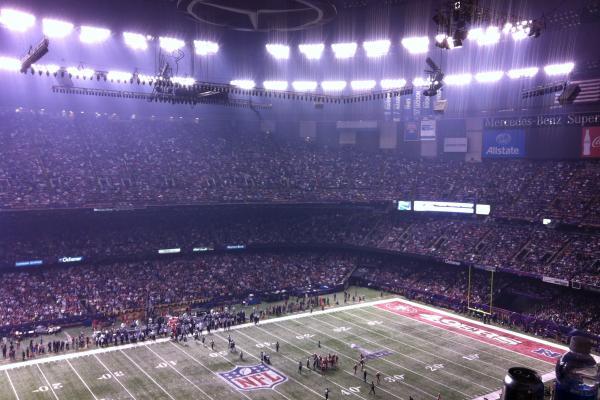 Super Bowl XLVII had its memorable moments, including a first-ever power glitch, but let us talk about the game first. The Ravens went up big early and had to hold off a furious San Francisco rally, which they did thanks to two huge defensive plays in the fourth quarter.

The first came after the 49ers scored the touchdown to pull to within two at 31-29, and Coach Jim Harbaugh had no alternative but to go for the two-point conversion. But the Ravens unloaded their most relentless pass rush of the day to force QB Colin Kaepernick to throw over Randy Moss' head.

My second favorite play was minutes later after the Ravens kicked a field goal to make it 34-29 and the 49ers drove right back down the field. On fourth-down, Kaepernick threw into the right corner of the end zone for WR Michael Crabtree. The receiver appeared to slow down after jostling with Ravens DB Jimmy Smith, and the ball sailed over his head. The replay suggested Smith had Crabtree's jersey in both hands, but the official was behind Crabtree and apparently did not see it. "It was a missed call," Crabtree said later. "(The official) missed two or three in the game, but that was it right there. The Super Bowl was right there."

It was good to see New Orleans natives Ed Reed and Jacoby Jones have outstanding games. Reed had a key interception when the 49ers were driving, and Jones' 108-yard kickoff return and 59-yard touchdown reception put him in the running for the game's MVP. But the champion Ravens had a nest of heroes. QB Joe Flacco was unflappable, making key plays when the team needed them most, usually to WR Anquan Boldin, who caught six passes for over 100 yards.

But the one thing that had never happened before in a Super Bowl was the 34-minute gap during the third quarter when power went out to half the stadium. Theories abound this morning as to what happened to create the power surge. Dome doomsayers first feared a terrorist attack, but thankfully that was quickly dismissed amid suggestions that Beyonce's halftime show sucked all the power from the New Orleans Entergy grid. A roughly edited photo began circulating immediately that showed a mischievous Sean Payton holding up a plug in a whimsical display of revenge for his season-long suspension. My personal favorite was that the ghost of Rose Mary Woods took over the power controls at the Dome and did for the Super Bowl what she did for the Nixon tapes 40 years ago.

The closest thing to a total blackout that I can recall occurring in the Superdome was a Monday Night game in the early 1990's when a Saints halftime show went slightly askew and some pyrotechnics hanging from the roof fell onto the field. The fire was quickly doused and only some melted Astroturf remained to mark the spot, but it was a staple on MNF bloopers for years to come.

Officials at the Greater New Orleans Sports Foundation immediately became a community of tightened sphincters amid fears that the glitch might have a negative effect on New Orleans' chances to get the 2018 Super Bowl. I doubt it will have any effect. NFL officials and team owners admit that New Orleans is the best venue for their showcase, with its combination of proximity, restaurants, charm, culture and entertainment. And if it weren't for the NFL's liberal use of the game as a bargaining chip with local municipalities to build new stadiums or upgrade existing ones, New Orleans would undoubtedly have the game more often.

So while New Orleans quickly shifts gears toward Mardi Gras this coming weekend, let us count on the next big game here in 2018 when the city celebrates its 300th anniversary. After all, nobody does it better, and Super Bowl XLVII was another great example. Rose Mary Woods or not!