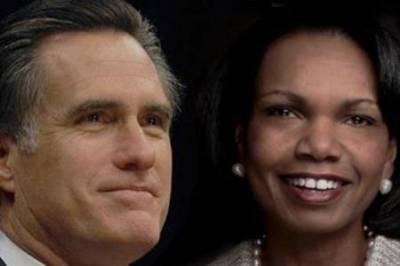 Today, the political world is abuzz over speculation that former National Security Advisor and Secretary of State Condoleezza Rice is the frontrunner to be named as Mitt Romney’s running mate on the GOP ticket.

Rice is a talented and impressive woman, who would bring an interesting mix of experience and intellect to the ticket. After her service in the George W. Bush administration, Rice removed herself from the political spotlight and has been serving as a professor at Stanford University the last few years.

While she has strong credentials in foreign policy, she is not the right choice for Mitt Romney. Rice is fairly liberal on social issues. In a 2008 CBS interview, Rice noted that she was "mildly pro-choice." To have a GOP ticket with a presidential candidate who used to be supportive of abortion rights and a pro-choice running mate is unthinkable. This would be a slap in the face to the core of the Republican Party, the social conservatives.

Many social conservatives doubt Romney’s conversion to a pro-life position, considering his frequent pledges in the past to support abortion rights. If he choses a “mildly pro-choice” running mate, some social conservative voters may abandon the Republican ticket. While they will not vote for Obama, these voters may vote third party or stay home. Even if it is just a small percentage of social conservatives that leave the GOP over the running mate issue, it could be devastating to the Romney campaign, which cannot afford to alienate any voters who are already suspicious of the presumptive nominee.

While the Rice talk may be a trial balloon, it could also been a real possibility. Recently, Mrs. Romney said that the campaign was “looking at (picking a woman), and I love that option as well.” Rice may appeal to female voters, as well as African American voters who supported Barack Obama in huge numbers in the 2008 election.

On the other hand, Rice has more drawbacks than just her pro-choice stance. Rice also supports a pathway to citizenship for illegal immigrants and laments that immigration reform was not accomplished during the Bush administration. This is in stark contrast to Romney’s stated position and the views of most conservative Republicans.

Condi Rice is a close associate to George W. Bush and her selection would remind voters of the unpopular former President. It would show that the Romney campaign is closely tied to the Bush family and their surrogates. Just this week, Romney generated millions in donations at a fundraiser with former Vice President Dick Cheney. Having Rice on the ticket would allow Democrats to claim that Romney represents “another four years of George W. Bush.” For a variety of valid political and policy reasons, Republicans need to move away from the Bush era if they expect to win.

Along with moderate to liberal positions on some key issues, Rice’s other liability is that she has never run for office and has no real political experience. Serving in a cabinet is not the same as hustling on the campaign trail each day looking for votes.

Since Romney is a moderate on so many issues with scant conservative credentials, he should really focus his selection on a strong conservative who can ideologically balance the ticket and lead a united Republican Party into the November election. Condi Rice does not satisfy that important requirement and if she is the vice presidential nominee it will create more division in an already fragmented Republican Party.

Hopefully Governor Romney will be steered in the ideologically right direction on this crucial decision.

Who should be the next President?  Discuss this issue

More in this category: « Race is in the cards in Louisiana Supreme Court race Drew Brees tweets, New Orleans Saints fans thrilled, we guarantee it »
back to top