TSA sexual gropes of Kissinger, Geraldo, others getting out of hand 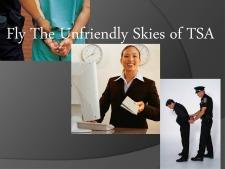 The Transportation Security Agency (TSA), the federal agency charged with airport security in the age of terrorism is getting quite a negative reputation throughout the country. On an almost daily basis, Americans learn of TSA agents being arrested for drug smuggling or stealing expensive items from passengers.

While criminal behavior is despicable, it is even worse for TSA agents to abuse their authority to take advantage of unsuspecting travelers. There have been many stories of young children and the elderly being targeted by TSA agents for embarrassing and invasive pat-downs.  Whether it is a 3 year old in a wheelchair or an 85 year-old grandmother, it is ridiculous that the TSA is using their resources to grope people that pose no threat to the traveling public.

Supposedly, passengers are selected for random pat-downs, so the agents will not be accused of committing a hate crime. Yet, in the modern era, the overwhelming majority of terrorist attacks have been committed by young radial Muslims.  Unfortunately, TSA agents are not allowed to racially profile passengers, which is a very effective strategy for airport security agents in Israel.  Because of political correctness, the TSA is unable to focus on the real security threats facing our nation. In the meantime, watch out grandma, grandpa and little Johnny a TSA agent may want to grope you during your next visit to the airport.

The latest example of TSA nonsense occurred the other day at LaGuardia Airport in New York City. Former U.S. Secretary of State and Nobel Peace Prize winner Henry Kissinger was given a “full monty” pat-down by TSA agents. According to a witness, freelance reporter Matthew Cole, Kissinger was selected for an intensive pat-down by TSA agents who did not recognize the accomplished diplomat. The wheelchair bound Kissenger was wearing suspenders and forced to stand “with his suit jacket off.”

In recent weeks, several other well-known figures in the world of media and politics have been selected by the TSA for extra attention. In Nashville, U.S. Senator Rand Paul (R-KY) refused a pat-down and was promptly detained by airport officials.

Fox News host Geraldo Rivera said that he was “manually raped” before leaving on a trip to Afghanistan. According to Rivera, “This guy, it seemed to me he was getting off on it and the tighter I got and the angrier I got, and then he just wanted to be a little more intimate, and go up here and feel up here.”

It seems that TSA agents are still “touching the junk” of their passengers and not just the men.  Last year, Susie Castillo, Miss USA 2003, faced a horrific situation at the Dallas Fort Worth airport. She posted the following statement on her website, “To say that I felt invaded is an understatement. What bothered me most was when she ran the back of her hands down my behind, felt around my breasts, and even came in contact with my vagina! Honestly, I was in shock, especially since the woman at LAX never actually touched me there. The TSA employee at DFW touched my private area 4 times, going up both legs from behind and from the front, each time touching me there. Was I at my gynecologist’s office? No! This was crazy!”

What is really crazy is that all of this groping and radiating is not effective against the latest type of terror techniques and bombs being developed by Al Qaeda. Current TSA procedures would not have discovered the rectum bomb that a terrorist tried to use last year to kill Saudi Prince Mohammed Bin Nayef. In addition, the non-metallic “underwear bomb” recently developed by terrorist bomb maker Ibrahim Hassan al-Asiri is completely undetectable by either an invasive pat-down or the naked body scanner. This type of bomb is powerful enough to bring down a passenger airliner.

Clearly, our country faces terrorist threats, but young children, the elderly, Nobel Prize winners and mustached television talk show hosts should not be our focus. If the current TSA procedures are not changed very soon, innocent Americans may be killed, sacrificed at the altar of political correctness.