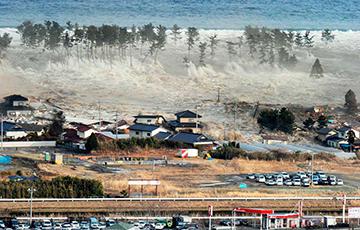 It was a royal wave.

A mere four months ago, Kate Middleton and Prince William arrived in the Solomon Islands on an official royal tour.  Kate wore a lot of designer clothing and shoes, an odd hat or two, the couple shook hands, wore native garb (sometimes correctly, sometimes not), received a lot of neat-looking necklaces, watched the island dancers, danced something like a hula themselves, and got to practice their royal waves.

But a few days ago, the Solomons were mercilessly struck by a different kind of wave.

News reports estimate that at least nine people were killed when an earthquake set off a small but powerful tsunami that sent 5-foot waves roaring inland on Santa Cruz Island, in the south Pacific, on Wednesday.  Approximately 100 homes across five villages were damaged or destroyed.  The dead included elderly people and at least one child, all of whom who died after being sucked under the swirling waters.  Numerous aftershocks followed, with even more destruction, panic, and fear.

Oh, right.  The royal waves, and those who wave them, are on an island all right.  The luxurious island of Mustique.

But it’s not an island in the Solomons.  Not the poor one demolished by the tsunami where the survivors have not even tents, but mere tarpaulins that rescue workers have hung in the remaining trees and scrub.  Noted one rescuer:  “These tarpaulins cannot keep these people safe from the rain. Some people are virtually outside, no tarpaulin on top of their heads.”

According to the Australia Network News, the aid agency World Vision reports that food and water in the hillside camps is running low, and “sanitation would soon become an issue.”

“Destruction has been widespread in and around” the stricken areas, World Vision says.  “Coastal wells have been covered by debris or contaminated, water tanks and toilets have been destroyed and coastal areas are littered with dead fish and poultry.”

Where are Prince William and Kate Middleton now?

Practicing their royal waves on a beach, but not the smashed and demolished one in the Solomons.  No, they are on a millionaires’ holiday in the most exclusive of resorts, enjoying themselves.  Thinking that they are being “royal” without having the merest clue of the kind of work that genuinely being royal entails.

Now, nobody expects Kate Middleton to stop tanning herself, and we all want what is best for the baby, bump or no, or wherever or in whomever it might be.  But it might be a good idea for Kate  to at least issue a statement of concern, make a pledge of sending some kind of aid, rallying all the multi-billionaires with whom she is now vacationing to send water, clothes, food...something.

Find a place where Kate can broadcast, with all her clothing on, and let her say, "I am so very distressed and concerned about the fate of the wonderful people of the Solomon Islands who gave me such a warm and unforgettably fantastic welcome on my recent visit there.  My prayers are with the Solomon Islanders now at this very difficult time.  I am here with my family, resting and waiting for my baby bump to appear so that I can prove that I am actually pregnant, but please know and rest assured that the fate of the Solomon Islands and its great people are always in my thoughts, and even now, I am working to make sure that needed supplies will be sent to help the Solomons through this difficult time."

There you go.  That takes care of Waity.

And Willie, if he really does want one day to be king, might just pick himself up from his beach or balcony or swimming pool or six-servants-attended dinners, dust himself off, and say, “Here I am, your future King, let me show you how a real rescue pilot handles such matters,” and then cut his vacation short, kiss his pregnant bride, and head off for an island (an archipelago, actually) which is less glamorous than Mustique, but which could use his help in its time of very real crisis.

Show up at the crisis island with things that families rendered suddenly homeless need: Water, medicine, and diapers.

Yes.  A load of nappies.  William, not having had any children of his own yet, may soon come to appreciate the importance of having a load of clean nappies about.  Having gone through the tragedy of Hurricane Katrina, lots of us can say that adults will go without almost anything, as long as their babies have clean diapers.

If William just put on a blue jean shirt, rolled up his sleeves, and showed up with a load of fresh diapers, aspirin, and water, the future of the monarchy in a big part of its empire would be assured for at least a century.

England had two princesses who understood how this worked.  One was William’s late mother, Princess Diana.  The other is his aunt, Princess Anne the Princess Royal.  If he wants to be royal and wants, someday, to be king, William would do well to escape his Middleton Minders, imitate the example of the Princess Royal, and head for the island where he is needed the most.

The Royal wave means nothing if the nappies don't get through.  People appreciate royal waves a lot more once they are hydrated, their children have nappies, and they are back in their homes, or a viable shelter.

Being a king of hearts, or even just a prince worth waving to?  That is how it's done, Willie.

It’s not fit for a king to give subjects the “wave off”. Right?

TELL US BELOW IF YOU AGREE OR DISAGREE WITH THE COLUMN?

More in this category: « Family Values, Gingrich and the Despicable media No Debate: Liberal Media CNN Misfires In Newt Gingrich Attack »
back to top