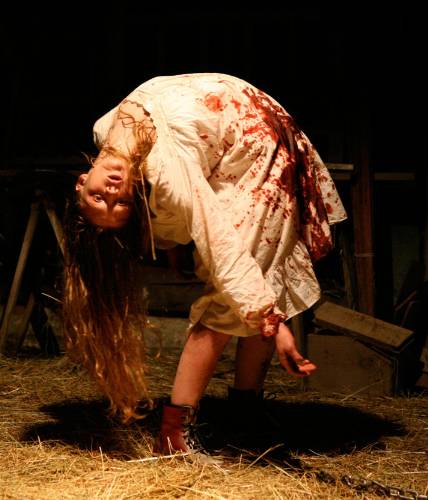 The sounds and sounds of Mardi Gras, voodoo and well, exorcisms.

Others might say they are part of a usual New Orleans day. Others might add, this is normalcy for a strange place that, going onto a mere eight years ago, was moments away from its last rites.

But, not to Ashley Bell, the star of the Last Exorcism and its sequel by the same name but with Part II, attached.

Bell, who is in New Orleans for Mardi Gras, sees the eclectic city from an altogether different angle.

Listening between the lines of my interview with her, you actually might hear how possessed she is over  the mystical qualities of the city, its carnival, its voodoo tingerd with he film’s exorcism themes--all  mixed into a cautious New Orleans blend, for the tasting.  If you dare.

Bell played the main character Nell, who in the spook, The Last Exorcism, became engorged by the demon.   In part II, she is left without family and on a semblance of a memory.

The Exorcism takes Nell from the steady rhythm of a sheltered past to the brassy cacophonies of the city on the river's bend, where she begins to live a different reality, one now with a boyfriend, a first kiss and perhaps, a last return to past haunts.

In the following audio excerpts from the interview, Ashley Bell discusses:

An overview of the Last Exorcism and the sequel;

The spirits of New Orleans, voodoo, and filming The Last Exorcism

Doing her own stunts in the movie

More in this category: « No Debate: Liberal Media CNN Misfires In Newt Gingrich Attack Spagnuolo, A Good Fit For New Orleans Saints »
back to top