Tales of New Orleans Saints Training Camps Near and Far 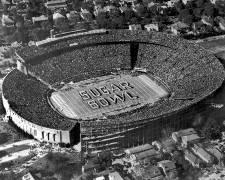 The Saints are going to training camp this week, but what's the big deal? Pitching a tent in the back yard is not camp! The players will pull into their normal parking spots at 5800 Airline Drive, go into the same locker room they inhabit all year and then pretend like it's something new and exciting. An NFL training camp is drudgery, but at least in the old days it was something new, exciting and a petri dish for legendary tales. Today's modern NFL camp is not like the training camps of yore when the stories seemed to get better the further away from home you trained.

Saints training camp lore was forged at venues from the Pacific shores of California to the Florida beaches to the cheese curds of Wisconsin. As the late Wayne Mack reported in his classic tome of the early years The Saga of the Saints, the first training camp was at Cal Western College in San Diego. Dubbed the "concentration camp" by new coach Tom Fears, players lived in dormitories while newbie owner John Mecom lived in luxury at the plush, private Kona Kair Club on picturesque Point Loma. That pattern continued when the club moved to Vero Beach, which was a great place for Mecom to park his yacht.

Bum Phillips added to the Vero Beach legend when he invited his pal Larry Gatlin and the Gatlin Brothers Band to do a private show for players and coaches. Bum had promised band members they would stay in the Dodgertown housing with the players and even let them run through some drills. But when Phillips was told there would not be any free rooms until a mandatory cut the next week, Bum made a command decision. "Ain't no problem. Move up the cut!"

Bears castoff Doug Atkins might have been at the end of his career when he came to New Orleans, but he was still fearsome at Saints training camp. One night, Atkins was trying to get to bed early when some players in the room above him began playing loud music. Not one to ask, Atkins went to his suitcase where he kept a loaded pistol and promptly fired a round into the ceiling. The music stopped and Atkins went to sleep. No casualties or loud music were reported for the remainder of camp.

Things were a bit more civilized when Jim Mora became head coach in 1986, and camp was held for two years at Southeastern Louisiana University in Hammond. The venue was convenient for Saints fans, but the South Louisiana summer was not conducive to putting in the physical work that Mora demanded. During the first camp, so many players missed practice with heat-related illnesses that trainer Dean Kleinschmidt began ordering IV fluids by the gallon. To get out of the heat, GM Jim Finks worked a deal with his old team, and the Saints visited the Bears at Platteville, Wisconsin, for a week of practice. During the week, Finks dispatched me and Jay Romig to nearby LaCrosse, which had outstanding facilities.

The Saints launched a movement by signing up with the University of Wisconsin-LaCrosse, followed by the Chiefs moving to River Falls and the expansion Jaguars to Steven's Point. With the Packers at St. Norbert's College and the Vikings across the Mississippi River at Mankato, the Cheese League was formed. LaCrosse seemed to be the ideal location, but fans in Louisiana were not happy with the move out of state. They received some satisfaction during the first camp at LaCrosse in 1988 when the opening week temperatures hit the century mark and stayed there. The Times-Picayune even ran a temperature "scoreboard" comparing the 100-degree heat of Wisconsin with the balmy 96 of New Orleans. That was the same week some overheated players tired of a smart-mouthed summer ballboy and taped him to the flagpole in front of the players' dorm until he was freed several hours later.

All stories were not so humorous, including the time a stripper found her way into the players dorm and created some pre-Bountygate distress throughout the organization before dropping her lawsuit. And maybe it was such stories that make training closer to home preferable. As most trends have an expiration date, nearly all NFL teams now train at their home facilities or within easy proximity. And it's probably a good thing for fans when they can get their daily fix by attending camp and seeing their heroes up close and personal. Maybe it's by design, but I haven't heard any good training camp stories coming out of Metairie lately, have you?

More in this category: « Bayoubuzz launches new Louisiana business and profession directory So Romney wins, Jindal skips Louisiana and Dardenne Does Louisiana Governor? »
back to top