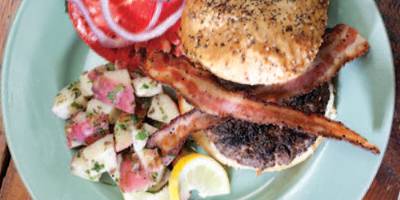 What bump, you ask?

Why, that infamous baby bump that Kate Middleton showed off when she left her extravagant private Balinese-style villa to go hopping about on the beach in a teensy bikini, minus her requisite "pareo."

Look carefully now, because Chi Magazine just published photos of Kate Middleton in a bikini on Mustique, walking around and showing of her baby bump.

There doesn’t seem to be any bump.

It looks a lot more as if Kate just finished eating a cheeseburger and fries, and it’s showing a bit.

Nature has ways of remedying those kinds of bumps.

Where’s the beef? You’re looking at it! Hope it tasted yummy, because on Mustique, Kate probably paid at least a C-note for it.

But it’s just a cheeseburger and fries bump.

Honestly, it doesn’t look like any fetus is gestating in Kate’s womb. If so, it is a very small fetus for someone who is supposedly almost 4 months along.

But if she’d properly draped her body in the requisite "pareo," we’d still be enthralled in the mystery of Kate’s baby bump, and the idea of a cheeseburger and fries digesting in her tummy would not even cross our minds.

Yes. The unelected lords and ladies who rule the Island of Mustique have decreed that women walking around the island in a bikini or otherwise in a state of nudity or near-nudity must cover themselves with a gossamer fabric that, in my household anyway, also doubles as a nice table cloth.

If Kate wanted to be nude or nearly nude, she could easily have stayed inside her sumptuous, six-servant mansion, or sunned herself alongside its secluded 64-foot pool (I assume that means the pool is 64 feet long rather than deep). That way, only her six household servants, her and Willy’s four (at least) protection officers, and her ever-so-present four family members and their friends would have seen her. Fourteen people only.

That is so private!

Instead, Kate decided to leave her private Eden, head down to the more or less public beach, and prance about in the sand without wearing her "pareo," or Willy’s T-shirt, or a long blue jean shirt, or a cute terrycloth coverup. She hung all over some pudgy, bald-headed guy in baggy, ill-fitting clothes who I just know could never be Prince William because hey, I got up early and watched that royal wedding of the century, and by golly, I know what Prince William looks like!

Why would someone who claims to value her privacy above all else be so reckless?

Well....have you ever really, really wanted a cheeseburger and fries?

I guess that Kate could send a servant down to the beach to fetch some, but as the Queen once said about a similar remark when Princess Diana wanted to buy some winedrops, "That is the most pompous thing I have ever heard."

Unless you are really trying to be a totally private person. Then, you just might send the servant down.

Isn’t that why people have them?

I’m not being snide. I don’t have servants. But I do have a teenager, and he doubles as a servant sometimes, or else he doesn’t get his allowance. And I certainly have sent him out to fetch me a cheeseburger and fries on occasion, especially when my "pareo" is indisposed because it’s being used as a tablecloth. But honestly, if I had a servant and I did not want to be photographed without my "pareo," or even in my "pareo," and I had a real baby bump that I was hiding from the world, well, that’s what I’d do.

Because that is what servants and teenagers are for!

Kate could always send her brother James to fetch the cheeseburger and fries, but he seems so easily distracted.

Anyway, some very lucky paparazzi, or perhaps just a fortunate fellow luxury villa renter who wanted to pick up a spare half million dollars, now has photos of Kate Middleton and her cheeseburger and fries bump.

When nature calls, it will all be history.

We don’t doubt that a royal baby is on the way. Babies appear when they appear. Ask us no questions, and we’ll tell you no lies.

Its projected arrival in June or July will be a great event.

Meanwhile, we hope that Kate will keep her appetite up, so we can take another gander at her beefy bump the next time she trots it out.