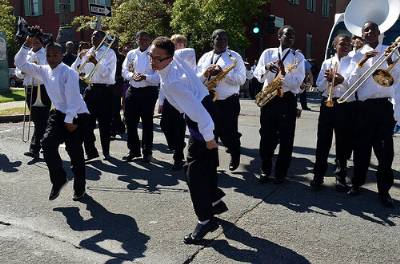 Louisiana organization news for Febuary 20: Get your CRCL costal stewardship awards nomination in by March 4, check out Cokie Roberts at Loyola University, LOMGA is 90 announces Pelican Awards, and the New Orleans Jazz Foundation offers its Class got brass competition open for application

Louisiana Coast Awards
Get your CRCL Coastal Stewardship Awards Nomination in by March 4!

The deadline for nominations is approaching for our 18th Annual Coastal Stewardship Awards, so now is the time to tell us why you feel someone should be recognized for their commitment and achievement in restoring and protecting our coast.

Your coastal champion could be a volunteer, student, researcher, sportsman, governmental or business leader, even an organization dedicated to preserving our coastal way of life.

Anyone can nominate a person or organization for a Coastal Stewardship Award. To officially submit a nomination, just visit our website, download the form and send it in.

Each year, the Coalition to Restore Coastal Louisiana (CRCL) is proud to honor those who go above and beyond for the coast. These awards are our highest form of recognition for coastal stewards, and your help is valuable to discover worthy candidates for the awards.The deadline for nomination is less than two weeks away, March 4, 2013. This year’s 18th annual Coastal Stewardship Awards Program will be held on Friday, May 10, 2013 at the Hilton Baton Rouge Capitol Center.

Got music? Get Awards...
Class Got Brass is the New Orleans Jazz & Heritage Foundation's program to support music education while also promoting our traditional culture. It's a contest for middle and high school brass bands. The top prize is $10,000 worth of instruments for your school's band programs.
The deadline to apply was this Friday, Feb. 22, but we're extending it for one week - to Friday, March 1.

We've also organized a free clinic this Saturday for band directors and students to learn more about the tradition, style and technique of brass band music. It's from 12:30 p.m. to 3:00 p.m. at Perseverance Hall in Armstrong Park. Dr. Michael White and the Stooges Brass Band will be the presenters.

Class Got Brass, the New Orleans Jazz & Heritage Foundation's new program to support music education in the schools - while promoting the brass band tradition - is ready for an encore.
It’s a contest for Louisiana middle and high schools to create traditional New Orleans-style brass bands (as opposed to marching bands). At stake is more than $20,000 worth of instruments for the winning schools’ music programs.

The first place prize is a gift certificate worth $10,000 in instruments, instrument repair and other supplies for the winning school's band programs - and an invitation to perform at the 2013 Jazz & Heritage Gala. Second place is $6,000; third place is $4,000.

Are you ready to rumble? Then polish your horns, shine your shoes and straighten your caps, because Class Got Brass is back.

Applications are now available to enter Class Got Brass 2013. The deadline to apply is March 1. See www.ClassGotBrass.com for complete details and the online entry form.

Class Got Brass is open to all middle schools and high schools in Louisiana. Schools may enter a New Orleans-style brass band of up to 12 members. They must follow guidelines designed to emphasize the historic, world-famous brass band tradition.

After a preliminary competition, 10 finalists will be chosen to compete in a second-line parade on Sunday, March 24, 2013, in conjunction with our Congo Square New World Rhythms Festival. Many of New Orleans top' brass band musicians will serve as judges to determine the winners.

"We want to support music education in Louisiana - and to encourage our schools to embrace our traditional music and culture," said Don Marshall, the Jazz & Heritage Foundation's executive director. "We all know how hard it is for schools to pay for music programs. By providing a financial incentive, we're giving schools and band directors even more reason to join the competition - and to move our heritage forward."

For more details on how to participate in Class Got Brass - including the application form and guidelines - please visit www.ClassGotBrass.com.

Roberts will provide an historical account of New Orleans politics, touching on her family’s experiences and her own as a political correspondent, as well as offering perspective on the recent presidential election.

The event is part of Loyola’s Presidential Centennial Guest Series and will take place in the Louis J. Roussel Performance Hall located in the Communications/Music Complex on Loyola’s main campus. Free parking is available for attendees in the West Road Garage. A coffee and dessert reception will follow the event.

Capitol Hill was the backdrop for Roberts’ childhood—her parents represented Louisiana’s 2nd Congressional district for half a century—and led to her future as a national political journalist. After serving as a foreign radio correspondent for CBS in the 1970s, Roberts began covering Capitol Hill for NPR in 1978. She co-anchored ABC’s “This Week” with Sam Donaldson from 1996 to 2002.

Roberts’ work at NPR and ABC News has garnered three Emmy Awards. She was inducted into the Broadcasting and Cable Hall of Fame and is recognized by the American Women in Radio and Television as one of the 50 greatest women in the history of broadcasting. The Library of Congress honored her as a Living Legend in 2008.

Her bestselling book, <i>We Are Our Mothers’ Daughters</i>, is an account of women's roles and relationships throughout American history. Her histories of women in America's founding era—<i>Founding Mothers: The Women Who Raised Our Nation</i>, published in 2004 and <i>Ladies of Liberty: The Women Who Shaped Our Nation</i> in 2008—also became instant bestsellers. She also writes a nationally syndicated weekly newspaper column with her husband, Steven V. Roberts.

Roberts' talk will be available for viewing live online Tuesday, Feb. 26 at 7 p.m. CST at www.loyno.edu/speakers for those who cannot attend the event.For more information, please contact Loyola’s Office of Public Affairs.

Louisiana Mid-Continent Oil and Gas Association, the state’s only trade association exclusively representing all sectors of the oil and gas industry operating in Louisiana and the Gulf of Mexico, will kickoff its 2013 annual meeting at the Ritz Carlton in New Orleans this afternoon. The two-day meeting will convene local, state and national stakeholders to explore and discuss the current state of the industry and pertinent issues for the upcoming year.

“As we celebrate LMOGA’s 90th anniversary of promoting and representing the oil and gas industry operating in Louisiana and the Gulf of Mexico, it is important to note the incredible benefits this industry has brought to our state,” LMOGA President Chris John said. “Louisiana’s oil and gas industry is spurring economic growth through hundreds of millions of dollars in investments each year, thereby creating jobs and fostering benefits to businesses in every region of the state, while at the same time ensuring the industry remains a safe and responsible environmental steward.”

On Thursday, LMOGA will announce the recipient of the prestigious Pelican Award, which recognizes a company that has demonstrated outstanding achievement in the industry and made significant contributions to the state of Louisiana.