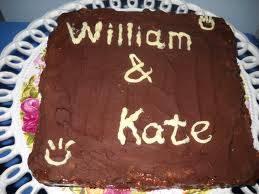 That decree was what Marie Antoinette supposedly said when starving French peasants were screaming for bread.

It is hard to imagine that anyone can go broke by selling either cake or booze or bread.

But to go broke by selling cake AND booze AND bread seems especially remarkable.

And who doesn’t also buy basics like flour, and confectioner’s sugar?

To go broke by selling cake AND booze and bread and flour and confectioner’s sugar also seems especially remarkable.

But, so we are told, over and over--James Middleton is a remarkable man, with remarkable sisters, and it all goes to show how useful it is to head for the Mommy and Daddy Bank when one’s cake-baking and booze-selling business goes bust. Along with the bread, flour, and confectionary sugar side of the business.

Which is exactly what James Middleton did last week when his company, "Nice Group" (which he supposedly quit getting his college degree to start) was found to owe almost $50,000.00 to its creditors (presumably, the vendors who sold James the cake fixin’s and booze and bread fixin’s and flour and confectioner’s sugar), and maybe others who packaged it, mailed it, etc.

According to the Daily Mail, the accounts for James’s "Nice Group" state: "The bank overdraft is secured by a member of the director's family."

James went to the Mommy and Daddy Bank!

Now, that’s a genuine "Nice Group" for James! So often, non-Mommy and Daddy creditors are NOT a nice group.

No. Creditors who are not your mommy or daddy or Uncle Gary are sometimes NOT nice at all.

They are not cake eaters. They want to see things like balance sheets.

How nice is that?

When Daily Mail reporters asked him to explain his losses, James had a ready excuse: "‘Nice Group’ is a start-up company and as you can imagine there are overheads needed to start a company." Gosh, yes, James, we CAN imagine!

First, one needs to have the Mommy and Daddy Middleton Bank buy one a million dollar apartment in London where one can rest one’s head from all those tough start-up hours, while still being able to conveniently commute to work. One needs a place to safely park one’s new Lamborghini or whatever sports car, provided by the Uncle Gary Bank. One needs a lot of bar tabs rung up in all the best watering holes in London and then some (all legitimate business expenses, I am sure), to be paid for by the Mommy and Daddy Bank. Then, one might need a large physical plant of some kind, a phone line and/or internet for taking customers’ orders, a pen, paper, pencils for scribbling down said orders, a person to write all that tiring stuff down, then some flour, eggs, butter, sugar, and whatever else one might want to put into the cake to bake it, a spoon for stirring it all up, a pan to put the batter into, an oven to put the pan into, someone has to pay for the gas and the electric, and then you might need a box or two for the cake and booze and bread, postage, and...oh, businesses are weighty things indeed!

It’s all so time consuming!

But James Middleton has more to say about his visit to the Mommy and Daddy Middleton Bank. "I made the decision to finance [Nice Group] myself along with a loan rather than go to investors."

Because before there was the Mommy and Daddy Middleton Bank bailout, wasn’t there an "investor" known as James’s Uncle Gary Goldsmith, Carole Middleton’s younger brother? Didn’t Uncle Gary Goldsmith invest at least $17,000.00 dollars into James’s cake business? Didn’t Uncle Gary provide James with a snazzy set of wheels, as in a new, white Lamborghini (all properly used for picking up flour, eggs, butter and sugar to bake into cakes, and then for delivering said cakes to said customers, we’re sure)?

What we’re starting to wonder about is whether there is a Royal Bank of Prince William loan drifting about.

Going to the Mommy and Daddy Middleton bank for a bailout instead of bringing Mommy and Daddy in as "investors," James explains, "has its pros and cons. It does mean things don’t move as quickly as I would like but it does mean I keep complete ownership and control over my company."

This means that Mommy and Daddy Middleton can’t tell James what to do.

Mommy and Daddy Middleton will let their sonny-boy James have his cake, and eat it, too, whereas investors who are not James’s Mommy and Daddy might have asked questions like, "So, you are mailing customers a cake mix, directions, and a disposable pan...and why would they pay almost $25.00 for your cake mix when they can just pop down to the local Waitrose foodshop and buy a box of Duncan Hines for less than $4.50, and Waitrose will even deliver it?"

But thoughtful parents who truly want their child to succeed might also ask the same thing.

Thoughtful parents who truly wanted their child to succeed might say, "Look, dear, I just got this box of Duncan Hines’ chocolate cupcake mix delivered from the food shop around the corner, and the liquor store alongside it brought by a case of that nice chianti and some sherry for the dinner party next week, and it didn’t cost me more than $25.00 total, so why would anyone pay that much just for a cake mix and disposable pan?"

Of course, these are the same parents who might have said, twenty years ago, "Nobody will pay a dollar for a cup of coffee!"

But the Middletons have a long history of not messing around with pesky investors, and just having their cake and eating it, too. Or at least, eating it. Or just looking at it, because actual eating is not allowed.

James’s eldest sister Kate Middleton, the longtime paramour and recent wife of Prince William, was just recently unfavorably compared to the incomparable Austrian-born French queen, Marie Antoinette, for her extravagance and obsession with clothing, hair, and physique. Poor Marie Antoinette lost her head. Although many in the U.K. are feeling not only the pinch of a shrinking economy but are also facing outright joblessness and impending impoverishment, Kate Middleton just tucks her own still-attached head into her plaid Zara poncho, and goes on with her super-luxurious vacations and lavish shopping sprees.

And James’s other sister Pippa Middleton, a failed cookbook and party-planning writer, just ousted the incomparable, undeniably accomplished British cook and food critic, Delia Smith, as a food writer for Waitrose Magazine in the United Kingdom. Pippa triumphed over the much-worshiped and beloved foodie Delia because Pippa has "relaxed and easy entertaining ideas" and insists upon simplicities such as, "Have a bonfire on bonfire night." Pippa also advises us to pack our kitchen drawers "full of useful odds and ends." If that’s the test of being chic in the kitchen with Pippa, then I have been way ahead for years because my kitchen drawers are exactly that way!

But Waitrose, England’s huge foodie enterprise, may have tarried too long at the Mommy and Daddy Middleton Bank. Because they thought we’d all be too busy taking our deliveries of Duncan Hines cake mixes to notice, last week Waitrose guillotined poor Delia Smith’s beloved cooking column, and replaced her with Pippa, whose recipe for a splotchy, childish food-coloring based "rainbow cake" was said to be the charm that outdid Delia.

The Mommy and Daddy Middleton Bank has some interesting customers–a son who cannot sell cake, booze and bread at a profit; one daughter who can’t write about how to bake a cake, pour out booze, and slice bread at a profit; and another daughter who is having her cake and eating it, too, in Mustique and some place in Switzerland, and all around the town, in shopping sprees and exclusive holidays, while many British people cry out for bread, and can’t even afford the cake mix, let alone the booze, anymore.

Ah, the Middleton children–all cake, booze, and bread, and no profit.