Summary: The static kill appears to be successful and this week, the "final-kill" could be deployed to plug the BP oil well from  gushing into the Gulf of Mexico.  But, one environment group says the disaster may be far from over as they believe it has found either streams of red "oil or possibly a major red tide" off Louisiana. 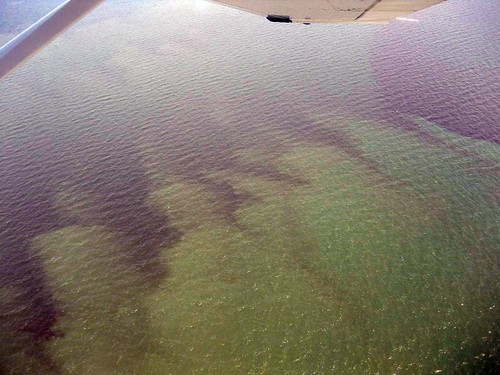 Now for months, scientists have been wondering if the BP oil well spill was causing any more problems other than spoiling waters, marshes and killing birds and other animals.

Yet, now many believe that since the well is now capped by the successful static-kill, the disaster is over.

Well, perhaps, not so fast.

Some news from the National Wildlife Federation's Louisiana staffers:

"On Sunday, August 8th, NWF staff did an overflight of the oil spill (thanks to SouthWings). Leaving out of New Orleans, we crossed the Chandeleur Sound and saw streams of red oil on the surface of the water caught in a rip line. As we flew farther into the sound, we saw mile after mile - as far at the eye could see - of what looked like red, dispersed oil just below the surface:

We sent some photos to a coastal scientist who is not sure if it is oil or possibly a major red tide. Either way, that would mean massive wildlife kills.

Our team is headed back out tomorrow with scientists to sample the water.

We'll keep you updated on what Monday's boat trip finds."

And so will Bayoubuzz.


Tweet
Tweet
Published in Latest Buzz
More in this category: « Round Louisiana: LSU incubator; Cancer Consortium, JEDCO, Mugshots US Government shutdown: Blame Obama, GOP, Democrats, the most? »
back to top