Kate Middleton must waity as Queen Elizabeth recovers from illness 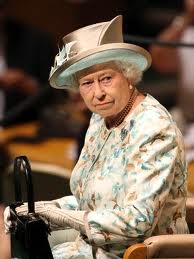 Kate Middleton raised some eyebrows last week during her quickie visit to the English town of Grimsby. Making sure she wouldn’t miss her flight to the glamorous wedding of high-society and mega-rich new "best friends" in Switzerland, she popped over to Grimsby by helicopter, and quickly visited a hospice.

Which is a place where terminally ill people stay for care before they die.

While making her hurried rounds prior to jetting off for the glamor event, Kate was told by hospice patient Claire Moss-Smith: "I’m waiting for you to be Queen.’ Kate laughed and replied: ‘You might be waiting a long time."

Miss Claire was likely paying Middleton a compliment, as in, "I think that you will be a wonderful queen consort when Prince William becomes king." That is clear enough. And perhaps she was wistfully tying this in to her own sense of "waiting" in a place that no longer measures time by the same standards as those who are healthy and expect to live a long time, if not (somewhat delusionally) forever.

Part of preparing for public engagements where a royal family member actually meets and engages with members of the public means that one anticipates what might be said, and then comes up with a variety of pleasant answers.

Where are those men in gray suites when you need them?

Isn’t this what private secretaries and equerries are actually paid to do nowadays?

Now, maybe Kate breezed in and out the hospice making careless remarks about the dynasty because she was just in a hurry to catch her luxury flight over to Switzerland and not be late for the festive wedding-eve meal of raclette–a delicious concoction of scraped-off melted cheese served with pickled onions, ham, and dried beef called "bindenfleisch." Dried beef jerky, actually.

Yum! Sounds just like what a pregnant woman wants to tuck in to.

We understand all about being hungry, and all about wanting to do something fun, like sledding while five months’ pregnant, and walking in the snow, and wearing white to a wedding. Honestly--Why should the bride have the day all to herself when celebrities like Kate Middleton bother to come all that way?

But it sounds as though it was a bit thoughtless to say to a hospice patient, "You might be waiting a long time," since the whole point is that the terminally ill may not be able to wait "a long time."

And it also seemed a bit thoughtless to not consider saying something typically royal about waiting to ascend the throne, such as "I am Her Current Majesty’s most heartfelt servant and liege woman, and I hope that she lives forever and ever, and her good son, Prince Charles, after her, forever and ever, and I will defend them both to the end of my days, Amen."

I mean, didn’t Kate watch "The Tudors?" Even "Game of Thrones" might give her some good ideas on what to say that sound more royal, more regal, more...refined. More...thoughtful and poised.

But when one is panting to get to Switzerland for the wedding feast of raclette and bindenfleisch and ham with pickled onions, well, one is liable to say anything.

We know that Kate helicoptered about and then made her plane to Switzerland on time because there she was, just hours later, walking around, slipping on ice, sledding down an Alp, sipping cider, and wolfing down raclette. With sparkling apple cider. Because the Swiss warn you about raclette: If you eat it while drinking water, it hardens into a great big oily glob in your stomach, and makes you ill. You should only eat it with a nice white whine. I mean, wine. So maybe that baby bump people said they saw a hint of in Switzerland was just Kate’s stomach digesting a raclette cheese blob.

Who knows for sure?

All we know is that the next day saw Kate practicing her royal wave and turning sideways against the crowd staring at the beauteous bride to stare, in turn, at one of Prince William’s old flames who had the audacity to show up in a bright red coat.

Then came the news that Queen Elizabeth went to hospital with "gastroenteritis," which made monarchy-watchers a bit nervous.

Did the Queen eat too much homemade raclette? Or is something seriously dynastic about to happen? This news, along with Kate Middleton’s easy-breezy, "You might be waiting a long time," gave some people the willies. Willies that they might end up with William, the prince people are now starting to call, "Mean Willie," and the woman who may, one day, become his queen consort, assuming that he becomes king.

Queen consort. That is much different from being "Queen."

And while it’s true that, assuming all goes well, Queen Elizabeth will survive a very "long time" and be followed by her first-born male son, Prince Charles, who will also survive and reign a very "long time," and so it may indeed be "a long time" before Kate becomes queen consort (assuming that she is still married to Prince William, that he is still alive, or that some other arrangement has not been made). And that is how it is meant to be.

The British crown is not a popularity contest. Not usually. Not recently, anyway.

Watch what real royalty used to be, before it all begins to irreversibly change.

Where are those men in grey suits when you need them?