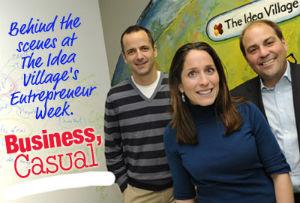 Idea Village of New Orleans is now in its 13th year.  As its signature event, Entrepreneurship Week is fast approaching, Bayoubuzz interviewed its President and CEO, Tim Williamson, to discuss the New Orleans area, entrepreneurship, the upcoming annual event and other matters.

Last week, in part week of the Bayoubuzz interview, Williamson discussed the organization’s origins.  In this edition, Williamson and Publisher of Bayoubuzz.com, Stephen Sabludowsky discuss entrepreneurship in New Orleans, how can the environment improve, changes that are occuring and the upcoming Entrepreneurship Week.

Below is a summary of the interview conducted by Stephen Sabludowsky, Publisher of Bayoubuzz.com.

The video is 9 minutes and 9 seconds and we encourage you to watch it as Williamson talks about some exciting but challenging times for the New Orleans region.  (The echo feedback you will hear is not due to Google technologies).

Here is a rough summary:
In segment one, Williamson responds to the question what should New Orleans do that would be the “jackpot” for entrepreneurship growth.

(0:30) Williams responds by stating the city should continue what it is doing but as a community to install systems that would enhance the development.

(1:04) The Idea Village President said the city should set a major goal around the 300th anniversary of the City of New Orleans to expand the chances of entrepreneurship growth.

(1:36) Capital is not the issue, but seasoned talent that can help businesses scale.  The city needs more seasoned talent in the 40’s-50’s age bracket that have the experience to help take a company that has perhaps 100 employees to 1000.  The needed  talent  could help companies with marketing, sales and can help grow the business.

(2:47) New Orleans has companies that are at a point of this type of growth, such as Naked Pizza, Receivables Exchange, Federated Sample, Iseatz--they are at te point where they are able to scale and attract the seasoned talent.

(3:08) What excites him the most is that more people within that age bracket are moving into the city, even with their families, as a reversal of the brain-drain.

(3:45) Williams discussed the upcoming Entrepreneurship Week which is in its 5th year and which starts March 16.  The event will be housed at Gallier Hall, will have the likes of Walter Issacson and Jim Coulter in attendance, which will bring in 16 national investors to look at 16 companies, will include a variety of events such as Water Challenge, Education Challenge and more.

(6:31) when asked about moving the event date in the future to correspond with the French Quarter Festival and Jazz Festival, Williamson said the overall goal of the event is to focusing upon local growth but this year, delegations are coming in from Latvia and Israel.  Williamson believes the event will attract from 3 to 5 thousand people.

(8:15) Williams also mentions that we could make a vision that by 2018, the event could rival SXSW, if we were to bring in the city’s resources, the music, the good and broadcast the event for the city’s 300 year anniversary.  That is a vision we could do.