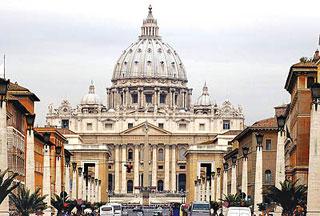 The Catholic Church has a new pope.

According to NBC news, the Church have chosen Cardinal Jorge Mario Bergoglio of Argentina and has taken the papal name Francis.

Cardinal has been elected as the new pope, Holy Father of the Roman Catholic Church! He will now be known as Pope Francis!

Bergoglio was the cardinal Archbishop of Buenos Aries, Argentina.

The new pope was elected after just 2 days of voting by the cardinals, which is considered fast for the modern Church.

St. Peter's Square is packed and cheery, yet there is a sense of reservation and discipline as thousands of people are packed together in the square. There remains a sense of awe and a sense of reverence at this most solemn and holy moment.

French Cardinal Jean-Louis Tauran, the senior cardinal in the order of the deacons, stepped onto the balcony of St. Peter's Basilica to announce, "habemus papam," Latin for "We have a pope."

Tauran then revealed the pontiff's birth name and the name he has chosen for himself as pope.

The appearance of the new pontiff triggered the second roar from more than 100,000 people jammed into St. Peter's Square. The first was when the faithful, standing in a cold rain, spotted white smoke wafting over the Vatican, signaling the election was over. Moments later the bells of St. Peter's Basilica rang out, soon joined by church bells all over Rome.

Francis, whose papacy is effective immediately, will be formally installed in the coming days. It's unclear when the installation Mass will happen, but Vatican spokesman Fr. Frederico Lombardi said earlier on Wednesday that Tuesday, March 19, the feast of St. Joseph, is a possible date. He spoke before white smoke signalled news of a new pope, and it was unclear if he expected a decision on Wednesday. Lombardi also said in the same interview that the new pope would likely celebrate Mass with cardinals the morning after his election.

The date of a papal installation typically begins visit with cardinals to the grottos of St. Peter's Basilica, where the first pope, St. Peter, is said to be buried. There, the new pope is expected to say, "I leave from where the apostle arrived" before a procession to the square and an installation Mass (the Mass lasted two hours for Benedict's installation in 2005).

More in this category: « New Orleans Saints vs. Atlanta Falcons: How good is Matt Ryan? Louisiana Gov. Jindal On Iowa Stump For Rick Perry, Again »
back to top