Pregnant Kate Middleton stuck Stiletto heels are for the dogs 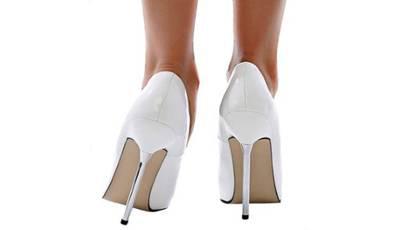 In America, when shoes make our feet hurt, we say, "Our dogs are barking."

What I want to know is, how is Kate dealing with the pain?

Is she barking yet?

Oh, righty. In the United Kingdom, "barking" means something different. It means....uhm, craziness or something.

But in Middleton’s latest stiletto episode, there was a real, live dog involved. So when we say "barking" here, we aren’t saying that Kate is barking, meaning that she’s fallen into madness or something. No! We mean that her feet must hurt.

So different, we Americans and the English. Potato, Po-TAH-toe. Wallis Simpson and King Edward VIII.

One particularly skinny, spiky-looking one of Kate Middleton’s stilettos got stuck in a grate this past weekend, as Kate attempted to disburse little bunches of tiny shamrocks to the Irish Guards and their regimental wolfhound mascot, Domhnall, on St. Patrick’s Day, in the rain.

That means that, when Kate attempted to go forward, her foot stayed behind.

If she’d fully fallen down, she’d have been a wet, smudgy mess. And she could easily have sprained or broken her ankle, wrenched her knee, twisted her hip, pulled out her back, or fallen upon her tailbone and cracked it.

Her husband, Prince William, in full dress uniform with large, golden braids as big as pretzels sold on the street in Philadelphia, came over and held out his arm as she bent down and unjammed her shoe. Unlike Sir Walter Raleigh, he didn’t lay down a coat for her to rest her dainty foot upon while he manfully unjammed her recalcitrant high heel. But then, Kate Middleton is no Queen Elizabeth I, is she?

No. She may become Queen Consort someday, maybe. But meanwhile, she is publicly proclaimed the mother of Prince William’s unborn child, and so perhaps we all would have liked to have seen Prince William lay down a raincoat from their ever-present personal protection officer, or something like that. Something gallant.

So we are disappointed on a few levels. First, that a pregnant woman would be wearing shoes that could cause her injury and us to be alarmed, and second, that her hubby Willy did an act of gallantry at the rather low end of the spectrum.

At least, he didn’t leave Kate lurching about, unbalanced, yanking and scraping her stiletto out of the drain grate.

Would she have miscarried her five-month fetus if she had fallen?

Not very likely. Genetic problems and smoking cause most miscarriages. Pregnant women and their fetuses often survive small stumbles, trips and falls, even plummets dramatically down staircases at Sandringham while chasing after errant husbands.

But Kate might have broken her ankle due to her entrapped stiletto, and that wouldn’t have been good. That would have slowed her down from making those dashes to all the High Street shops for at least a couple of days. She’d have to send a lady-in-waiting or her husband’s manservant out to fetch her daily dose of decaf StarBucks. And who would take Lupo walkies? If she jetted off to Switzerland for another holiday, she’d have to use a handicap-approved sled.  What a bother!

And then there was the immediacy of Kate’s royal situation. Think of all those shamrock bunches going to waste!

If she keeps tarting about in those high-high heels, Kate might still throw out her back, and that wouldn’t be good.

The higher the heel, the further Kate’s body weight is shoved forward, and the more unstable she becomes. The stilettos cause her pelvis to tip forward, as was easily seen in the many Daily Mail photographs of the event. And to compensate, Kate looks like she’s leaning backwards about 15 degrees westward from where her head usually is, while thrusting her belly outwards in the forward position.

But don’t just take my word for it. According to Dr. Jennifer Johns, a physical therapist at the Boston Sports Medicine center, walking around at such an angle can ruin Kate’s hips, knees, and ankles even if she’s not pregnant: "This change in pelvic position alters the alignment of the spine and makes it difficult for the body to maintain its normal center of gravity." That makes it easy to stumble and fall. But there is another, more sexual tradeoff for the posture pain, barking dogs, and general accident risks, notes Dr. Johns. Women shop in droves for "poisonous pumps" that push their bodies unnaturally about so because "this position is generally desired by women because the exaggerated curve of the back makes the buttocks more prominent."

She seemed to bend over easily, without any of the weariness that accompanies pregnancy, which is interesting. Maybe Kate is just super-fit. But most pregnant women, by their fifth month, are already feeling their joints loosen up, and their balance disappear, so much so that bending over even to clip one’s toenails is problematic, if not say downright wobbly.

Of course, that is likely what ladies-in-waiting and footmen and valets are for. Or perhaps toenail clipping is the task of the assistant to the royal hair winder-upper.

Yes, the royal hair winder-upper. That is what I call the person who obviously is in charge of winding Kate Middleton’s voluminous hair ‘round and ‘round into these intricate piles of coils unseen in royal circles since Queen Mary’s younger days. Who has time for that?

Only people with servants. Willing servants. Servants who are not sweeping up or carrying out the trash, taking Lupo walkies, fetching the decaf Starbucks, or doing genuinely important tasks.  Servants who know better than to say, "Winding your long hair up into gigantic snakey coils is not in my job description."

We know that there must be a royal hair winder-upper because all this braiding and coiling is very difficult to do by one’s self. Witness Princess Anne, whose hair often seems to be styled by a weed-whacker. No, hair-doing is NOT why we love Princess Anne at all! She transcends tresses through hard work, through fighting off kidnappers, slogging through the African bush, bug and snake-infested savannahs, and other tough trips for her children’s charities.  Scowling all the while.  But we have become accustomed to this.

If we can’t see Anne's eyes, it’s because she is giving one of her squinty, steely stares that we’ve grown accustomed to seeing over the years. We no longer are turned to stone when we gaze back.

But Kate Middleton's snake head hair and her angry eyes are a different matter.

On St. Patrick’s Day, Kate perched a little black hat atop her brownish coils, making her head look exceptionally dark and stretched out from behind. Like Princess Leia’s Starwars’ sidewinder ear donuts, not seen in the present galactic universe, really, since Hitler’s Munich rallies. One got the uneasy feeling that, if we even so much as nudged the little black hat, that a nest of writhing snakes would immediately burst forth from the coils and flap about.

Can’t you just hear the "bbbboiiing!" as all those hairpins just can’t hold the tension anymore, and all the viper-like braids and coils go flying?

And that would surely unduly excite the Irish Guards and their regimental wolfhound mascot, Domhnall.

Having a coily, snakey hair-do might be a security concern. If it all suddenly came undone, the Guards might fire their weapons accidentally, just in a panic, and it’s ironic that it might have happened on St. Patrick’s Day because Catholic legend claims that St. Patrick shooed all the snakes out of Ireland. Surely even the mascot dog would have barked.

But is there a buzz about, as well? What interrupts Kate’s almost surreal Medusa transformation are her eyes. They are dark, too black-looking, deep, not burning but cold like coals left out in winter to freeze, and they have a habit of disappearing beneath her brows. It’s unclear whether Kate’s eyelashes are just heavily mascaraed, hormone-growth-enhanced, or fake ones, but on St. Patrick’s Day, they were so kohled about that they made her eyes seem almost wasp woman-like, like Roger Corman’s anti-heroine in the 1959 campy horror thriller (minus the little black hat). Remember all those newsy articles when Kate first married Prince William about how Camilla was sharing her bee-pollen facial beauty treatments with Kate, and all was just hunky dory in Buckinghamland?

"Wasp Woman" is the cautionary tale of about a truly revolutionary working woman, a self-made cosmetics millionairess who employs a scientist to create a rejuvenating beauty cream made from wasp enzymes. Because she is obsessed with looking youthful even though she is aging, the millionairess insists upon testing the cream on herself. At first, it restores her beauty and adds a saucy, sultry dark element. But then, it actually turns her into a horrible wasp-woman creature who goes about in the darkness, killing men.

Does that describe the present-day Royal Family or what?!

Everything but the low-budget part.