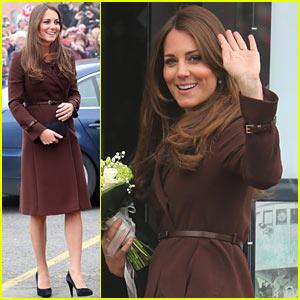 Look at the moving white coat, the stick-thin legs encased in black tights, and a shank of brown hair. Why, its...Kate Middleton. And she’s...

Maybe in a psychological horror-thriller movie that involves a lot of mental torture, that scene works...

Maybe while checking in to the Bates Motel.

The loss of a newborn or stillborn infant is so hard to bear that, whenever possible, such women are often moved from the maternity wards of hospitals to other floors. The cries of other babies are particularly painful to hear, when one’s much-anticipated child’s voice has been stilled forever. The living children who were excitedly expecting a new sibling now have to deal with a level of family grief that can be mystifying and also stultifying.

Pardon me while I get a bit maudlin here.

But, crikey! What’s the Palace thinking? Aren’t people paid enough to figure out these arrangements? Do the men in grey suits not have sufficient grey matter? Do parents and young children deep in mourning need this?

Certainly, the British parents who were grieving their recently deceased babies and children were good at keeping stiff upper lips and saying all the right things when "royalty" suddenly materialized into their midst, as they gathered at the headquarters of Child Bereavement UK this past Tuesday, March 19, in Buckinghamshire, England. Kate Middleton, allegedly pregnant, showed off her "bump" in a short black dress and vibrantly white coat, and again with the high-high heels as she scooped up a bouquet of flowers and the by-now requisite teddy bears. She and her husband, Prince William, made agreeable chit-chat about baking and devouring brownies and television-watching with Mary Berry, hostess of a wildly popular show called "The Great British Bake-Off" and supporter of the charity. A somberly dressed Berry, who lost her own son in a car crash, seemed bemused when Kate prattled about being "a big fan of your cookbooks and your cakes." William showed off his childish side when he similarly declared that his "tummy" was "a fan" of Berry’s.

Honestly–who tells them to say this stuff?

The unfailingly fawning Daily Mail reported that a grieving father said some nice things about Prince William, whom he said "just mentioned the fact that he had lost his own mother," the late Princess Diana. "William said, ‘You do realize I’ve been in similar circumstances," the father related.

Well, yes, we "do realize" that William lost his mother as a young teenager, and while that is hard at any age, he has not yet suffered the rawest wound of losing a child, a baby, a stillborn or miscarried fetus. At least, not as far as we’d know. And his brother Harry may be incognito right now, but seems to still be very much alive.

In a previous speech for the same charity, William has referred to losing his mother. It was touching the first time. Now, it has a "me-too" kind of redundancy that seems designed to trigger people’s sympathy, rather than evince empathy for those whose suffering the royal presence is supposed to assuage.

So perhaps it’s not surprising that, for William and his self-obsessed bride, no red lights went off in their brains flashing, "Bates Motel, Bates Motel, Bates Motel," as they sauntered in to shake the hands of men and women whose children and babies had died–men and women and young children who were receiving the good care and counseling of the best bereavement professionals in the kingdom. And so, perhaps these highest-quality bereavement professionals decided to either do some "shock therapy" or else chose their hardiest patients to meet, shake hands with, and chit-chat with what every grieving parent who’s lost their child or baby wants to see–

Cue that screetchy music that made "Psycho" so unremittingly scary!

Perhaps the mistress of the motel is out shopping again.

It might have been all well and good for Prince William to show up to Child Bereavement UK’s Center on his own–he is the royal patron, after all, not Kate. And it was nice of him to actually show up for the first time to the proper center, so he gets points for actually doing something as a Royal.

One Center care recipient, a mother of a dead adult child who gave her name as "Roz," described William as being "very sympathetic. He said, ‘I think you’re very brave to come into a situation like this. I do wish you didn’t have to be here under these circumstances." She claimed, "He could feel our grief and sadness."

Very nice things to say. But the real question is, how does William process reality?

Does the heir apparent of the heir apparent, or those who plan his schedule, really think that the grief-stricken parents, or perhaps men and women who have been deprived of being parents, want to share his "baby joy" (as the papers now call it) so directly? So in-their-face, as in, "Look, my wife is pregnant, too bad your wife is not?"

Perhaps Prince William and Kate Middleton are not intentionally cruel, or unthinking simpletons. Indeed, their idea of assisting with the grief therapy process was to have a "group hug" session with eight carefully chosen guests at the Bates Motel. I mean, eight carefully-chosen Bereavement Center adults, who received what Roz called "a kiss and a cuddle" from both William and Kate.

So special that not one of these chosen eight wanted to give their full name, or the name of their dead child, or details of how and why their children died, to the salivating press reporting on Kate’s latest charity antics.

Special? It’s like watching "Psycho," actually. Just reading about it made the hairs on my neck rise up.

To be precise, it wasn’t exactly a group hug, although William said, "I feel that I should give you all a hug." No, it was a British group hug, which means that each of the mothers and fathers in the group took a turn to hug and be hugged by William and Kate.

Or perhaps channeling William’s late mother, Princess Diana, who really could do such acts with a sensitivity and graciousness that seemed glaringly absent when William and Kate tried it. Or else, trying to revitalize the "royal touch" by way of hugging. One wonders--Did anyone’s scrofula clear up? Probably not. We surely would have heard about it by now.

"Bewildering" is perhaps the right word to describe this latest outing.

Most likely, it was done in an effort to polish up Kate and William’s image which has been tarnished of late by a slew of luxurious getaways, sourpuss faces, public bickering, shopping sprees, one dead nurse, short-short skirts and high-high heels, arriviste relatives, naked photographs, one druggie uncle with literary aspirations, one unpalatable yet unintentionally comical cookbook, and high-society weddings.

If William had gone on his own to Child Bereavement UK, his visit might have been a poignant moment of genuine intimacy in which the likely future Prince of Wales would have learned something from people who have deeply suffered, and he could have more intimately shared his own personal suffering with them. But by bringing along Kate and her baby bump to meet and greet parents who are seeking treatment for losing their own baby bumps, William’s visit took on a bizarre quality.

Maybe Bates Motel is too strong an analogy, but the notion of a red flashing light being, well, ignored or, perhaps worse, unseen by those courtiers traditionally in charge of raising and lowering the curtains on royalty, is as creepy as a horror movie.

Can anyone cue up that screetchy movie music?

In trotting out Kate, who has been much criticized in Britain for conspicuous consumption and resort-trotting rather than engaging in humanitarian pursuits, William has done something curious indeed. He’s diminished himself when he could have elevated himself and the Royal Family to which he most decidedly belongs. By bringing along a pregnant woman–and it could have been any pregnant woman–he’s done something even more strange. He’s changed his valuable patronage of a deserving, legitimate charity into a stunt, so that his pregnant wife can be photographed in yet another mini-skirted outfit, a new coat, a new set of high heels, so that she can hold the flowers and receive the bears, so that the adoring crowd in the streets can publicly adore her and she can bask in that for a time. But leave those crowd-filled streets, and walk inside the place where the people mourn and yearn for children they will never see, never hold again, and the stunt takes on an air of cruelty. And perhaps William’s even caused some harm to the parents, who are too noble and too loving and appreciative of royalty to ever admit this.

Note to the valets and the men in grey suits who supposedly direct the royal lives: It’s time to pack the bags and check out of the Bates Motel.

If Kate won’t go, just leave her behind to rock away in that cobwebby chair.