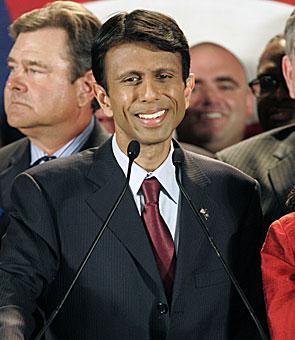 Way back in ancient Louisiana history, long before the Louisiana governor became a national republican commodity and Romney VP wannabe, ethics reformer Bobby Jindal, campaigned in 2007 upon the promise to keep government transparent and to ensure money could not influence government.

His number one pledge during his campaign for Governor was Louisiana should be a state where it’s not who you know, it’s what you know.

In fact, after he was elected, he made this statement to Rush Limbaugh, “Thank you, Rush, for those nice comments. Two things. One, I think the people of Louisiana were saying strongly that they wanted change. Our ﬁrst special session will be declaring war on corruption. I’ve said that if we’re going to move Louisiana to the top of the good list, who you know can’t be more important than what you know.

Throughout his five years as governor, numerous contributors have received top appointment.

One Louisiana government agency, in particular, has been packed with large campaign contributors—the Louisiana Board of Regents.

In 2011, the issue of contributing and then becoming a regent became a legislative issue.

A news report from WALB at the time said:
The 16-member Board of Regents oversees higher education in Louisiana. Nine of the current members of the board were appointed by Jindal. Records of Jindal's campaign contributions indicate eight of the nine members Jindal appointed to the Board of Regents gave sizeable donations to his campaign. Some made those donations within just a few weeks of being appointed and that has raised questions.

"That's an awful lot of people for that to be a coincidence," said Melanie Sloan, executive director of Citizens for Responsible Ethics in Washington (CREW). "It's hard to believe that each of the people would miraculously give money close in time to their appointment to the board."

The Jindal campaign adamantly denies the donations had anything to do with the board appointments and, indeed, there is no evidence that proves donations were a necessary part of being appointed. Below is a breakdown of the contributions and appointments. In some cases the appointment came before the donation was made, but in others, the person made a contribution before being selected. The maximum personal contribution allowed by law is $5,000.

Two other Board of Regents members also donated to the governor, but their donations came quite a bit of time before he appointed them.

The only current board member appointed by Jindal who does not show a personal donation to the governor's campaign is Scott Ballard.

One of those appointments was to Ray Brandt the car dealer and attorney.

Campaign records show that since 2007, Brandt has contributed at least $25,000 to a Jindal campaign through one entity or another.

According to a recent news report from the Daily comet:
Brandt, his family and his businesses have contributed $50,000 to Jindal's campaign, according to documents filed with the ethics board.

The men replace Scott Ballard, who Jindal appointed to LSU's governing board, and Vic Stelly, a former lawmaker who resigned, citing frustration with the Jindal administration's cuts to state funding for public colleges.

More in this category: « Jindal appoints to Board of Regents, Gaming, Levee Districts, Home Inspectors Colorado massacre, campus shootings, flash mobs are symptoms that crime pays »
back to top