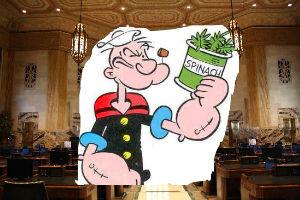 Have House Speaker Kleckley and the Louisiana House eaten their cans of spinach in their possible collective faceoff with Louisiana Governor Bobby Jindal?

In advance of that event, in a Google Hangout, Bayoubuzz Publisher, Stephen Sabludowsky questions The Lens reporter Tyler Bridges about the upcoming legislative session which is now days away from its commencement on April 8.

The influences of the respective government bodies have become an issue lately as the legislative battles commence.  Bayoubuzz.com has republished a Bridges article initially published on Friday by the Lens in which the reporter discussed how Jindal’s strong ally, Kleckley, has put  a hold on the governor’s signature legislation, the tax swap plan.  Kleckley acted the day after  Bernie Pinsonat and SMOR announced that  Jindal’s popularity has fallen sharply in Louisiana to below 38 percent evidencing that his plan is not popular with the voters.

Kleckley’s action was a sharp break for the House Speaker who has been viewed by some as being a “lapdog” for Jindal, as cited in Bridges article.

The interview focused upon the new-found push-back by the Speaker, the implications of that act, why Jindal has fallen in the polls, how that poll drop might affect the upcoming legislative session and why are the numbers so low compared to those prior to administrations--as well as other issues.

Watch the interview with The Lens' Tyler Bridges, below

SHOULD THE LOUISIANA LOUISIANA LEGISLATURE GREATER INFLUENCE?  WHAT DO YOU THINK?  TELL US BELOW