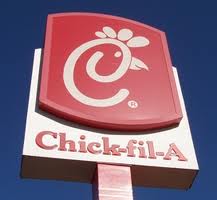 On Wednesday, I will be joining what I imagine to be tens of thousands of fellow Christian conservatives by patronizing Chick-fil-A, though in all honesty, I probably would have gone there anyway.

The Georgia-based fried fowl eatery has been my favorite fast food spot since high school.

Not only is the food delicious, but also they stress quality control (unlike practically every other national fast food chain aside from In-n-Out).  Their restaurants tend to be relatively clean and the primarily young people who work  there are very customer service oriented.  All of the free-standing restaurants I’ve visited employ “floaters” who walk amongst the dining customers to ask for refills or to remove food trays.

Another trademark of the company is their “closed on Sundays” policy that is plastered on their signs, doors and billboards, which I suspect has as much to do with alerting potential customers that they’re not open on that day as it does to remind the general public that this company honors the Christian Sabbath even at the loss of considerable profits, which is something people of all faiths should respect and admire.

It was only a matter of time that the overtly Christian food chain would find itself enveloped in controversy as American society and government becomes increasingly secular and intolerant if not outright hostile towards traditional Christian values and those who publicly subscribe to them.

Chick-fil-A president Dan Cathy made comments that he believes marriage should be reserved as the union between a man and a woman and further opined that a nation that blatantly defies the will of the Lord risks receiving His judgment.

The first part is hardly controversial.  Up until a few years ago, an overwhelming majority of Americans maintained that the government should only recognize traditional marriage.  Furthermore preserving the exclusivity of traditional marriage has been endorsed in statewide plebiscites across the country, including California.

As for the second, a brief perusal of the Old Testament would explain why someone who believes the Bible is more than a collection of creative writing stories would believe such a thing.

But the secular-liberal cultural Jacobins could not bear to see this verbal sally by a prominent businessman espousing American traditionalism and Judeo-Christian values go unanswered and have responded with name calling (Bigot!), boycotts and protests involving the very juvenile conduct that former Pennsylvania US Senator Rick Santorum was subjected to by tawdry gay activists until the Republican presidential candidate qualified for Secret Service protection.

The gay activist community has gone from “merely” seeking tolerance (striking out sodomy laws) to demanding full acceptance of their agenda (which ranges from same-sex marriage to allowing transgendered men to use women’s restroom).

In the new secular society, one loses his/her/its right to even think “different”.  Imagine RuPaul screaming at a Christian minister for being a societal apostate and there you have the future if America continues its glacial slide away from traditionalism and liberty into a constitutionally neutered cultural abyss.

Perhaps the most absurd aspect of all is the declaration by liberals of a boycott of Chick-fil-A because of its executive’s personal views that are consistent with Christian teaching.

If conservatives boycotted every company that funneled a portion of its profits to liberal causes and politicians, we would have to create our own separate economy.

I am not pleased knowing that every time I buy a movie ticket, purchase a Hewlett Packard computer printer or pick up a new pair of Nikes, etc. a smidge of my money is lining someone’s pocket I don’t like, particularly Planned Parenthood and other abortion providing entities.

Conservative consumers who either don’t care enough to go through a proscription list before shopping or simply respect those companies’ right to hold/support disagreeable views and causes have indirectly funded liberal organizations.

There’s more to the liberals’ war on Chick-fil-A than glitter bombs.

It gets worse (and scarier).

Apparently public officials in Chicago and Boston have decided to play George Wallace to Chick-fil-A declaring that planned franchises shall not darken their burgs.

And so I will be waiting in what I expect to be a very long line at the Metairie Chick-fil-A on August 1st standing not only for a company I liked prior to the recent controversy but for the right of someone to speak his mind about his faith without fear of harassment from the commissars of political correctness and suppression by the state.

Mike Bayham is a political consultant in southeast Louisiana and posts his blog on politics at www.MikeBayham.com.