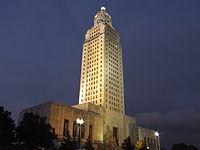 THE QUESTION: Crazy Louisiana legislative session or PAR for the course?

Or, will the state, which some believe is roughly $1.3 billion dollars in the budget hole going to use one-time contingency money, cut or a find some ready cash to pay the upcoming fiscal year’s bill?

These were questions Bayoubuzz asked Robert Travis Scott, former Capitol reporter and now President and CEO of the powerful watchdog group, the Public Affairs Research of Louisiana or PAR.

Using remote conferencing technologies on Thursday, Bayoubuzz publisher Stephen Sabludowsky interviewed Scott about these issues.  Scott spoke by iphone and the conversation was captured by video over the Internet.

Watch the video BELOW for the Scott interview in which he discusses the strength of Governor Bobby Jindal, the budget, the respective powers of the legislative and executive branches and, of course, the upcoming annual event as described below:

The Public Affairs Research Council of Louisiana (PAR) will hold its 2013 Annual Conference and Luncheon on Friday, April 19, at the Crowne Plaza in Baton Rouge.

PAR's Annual Conference will feature Ken Cohen, vice president of public and government affairs for Exxon Mobil Corp. Ken's keynote address is entitled "An Energy Outlook: A View to 2040." This will be an informative and forward-looking presentation about the future of global energy and Louisiana's role in it.

The Conference will also feature a morning panel discussion on the topic "Focus on the Legislative Session and the Fiscal and Tax Reform Challenges Facing Louisiana." The panelists include Rep. Joel C. Robideaux, Chairman of the House Ways and Means Committee, Sen. Jean-Paul J. Morrell, Member of the Senate Revenue and Fiscal Affairs Committee, Rep. Brett F. Geymann, Member of the House Appropriations Committee and Melinda Deslatte, Baton Rouge correspondent, the Associated Press.

The half-day conference is open to the public, and individual tickets are still available. The cost is $85 per person ($75 for PAR members). Lunch is included in the price. PAR's membership and Board of Directors will meet at 9:30 a.m. and the panel discussion will begin at 10 a.m. The luncheon starts at noon.

More in this category: « Teabag envy at Time Magazine Person of Year Pick Real Louisiana Education Reform Depends On Feds »
back to top