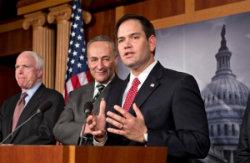 Today, as the world was fixated on the hunt for terrorist suspects in Boston, politicians on Capitol Hill were introducing another monstrous piece of legislation. The 844 page immigration “reform” bill was set for debate, but the Director of Homeland Security, Janet Napolitano, was unable to attend due to the manhunt in Boston. This should be considered an ominous sign about the legislation.

The only reform Congress should be considering is one in which current laws are enforced. This includes a completion of a southern border fence with Mexico and a doubling of our border patrol forces. Current laws on the books penalizing employers for hiring illegal aliens should no longer be ignored.

The U.S. Senate bi-partisan “Gang of Eight” wants to push through this legislation for the 11-20 million illegal immigrants in this nation, creating a “pathway to citizenship.” This attempt is misguided for individuals who break the law should not be rewarded with citizenship to this nation.

As we know from previous history, an amnesty bill will only encourage more illegal immigration. In 1986, three million illegal immigrants were given amnesty, but the promises to strengthen border security and crackdown on the hiring of illegal aliens were never fulfilled. Therefore, today, our country is facing an even bigger problem.

With all of this talk of amnesty, border crossings have increased significantly in recent weeks as illegal aliens hope to take advantage of forthcoming amnesty. This is an insult to the millions of individuals who have participated in the long and frustrating process to become a legal immigrant. Amnesty is also unfair to the hard working Americans who are struggling to find employment in this bad economy. According to U.S. Senator Jeff Sessions (R-AL), if the “Gang of Eight” bill is passed, it will create more unemployed people as the country already has “more unskilled labor than we can find jobs for today,"

Another important issue was addressed at the immigration bill hearing today. U.S. Senator Chuck Grassley (R-Iowa) noted that the Boston terrorism highlights the need to address “gaps and loopholes” in the process which allows foreigners to visit this country. Grassley believes the country should improve our screening process to prevent entry from those individuals “who wish to do us harm.”

The two suspects in the Boston bombing are terrorists from Chechnya. They have been identified as Dzhokhar A. Tsarnaev, 19, and his brother Tamerlan Tsarnaev, 26, who was killed early Friday morning. Incredibly, both of these terrorists were allowed into our country several years ago. In fact, Dzhokhar received a received a $2,500 education scholarship and was attending the University of Amherst as a medical student and serving as a lifeguard at Harvard.  His deceased older brother was a part-time boxer who promised to dedicate his “life to Jihad.”

All of these revelations raise troubling questions. Why was this family ever allowed in the United States? How many other terrorists have we allowed in our country? Instead of opening the door for more people to enter the United States from places like Chechnya, which is engulfed in Islamic radicalism, we should reject such entry requests.

In the hearing, Senator Grassley inquired, “How can individuals evade authority and plan such attacks on our soil?" He also asked "How can we beef up security checks on people who wish to enter the United States? How do we ensure that people who wish to do us harm are not eligible for benefits under the immigration laws, including this new bill before us?"

These brothers are both radical Islamists who are from a region known to have connections to Al Qaeda. They may have ties to a domestic or international terrorist network. This broader support may be planning other attacks in our country.

It is time to fight back by rejecting an open door immigration policy, and strictly limiting who may become a U.S. citizen. In this case, four people were killed, but next time it may be much worse.