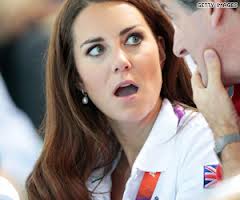 Yes. Call it a "tour of Scotland" if you like, but Prince William and Kate Middleton literally disappeared from London just before Easter, and then popped up quite unexpectedly in Scotland with Prince Charles on what some London newspapers called "a tour."

Did they attend church services anywhere in Scotland on Easter Sunday? Nobody’s quite sure.

Did they attend church services ...anywhere at all? Nobody’s quite sure.

Both Royals popularly known as "Willy" and "Waity" were missing in action at St. George’s Chapel at Windsor Castle, where Queen Elizabeth II, her sons Prince Andrew and Prince Edward, Edward’s wife and children, and Andrew’s children were noticeably in attendance.

But if William and Kate popped up at the Middletons’ church for Easter Sunday–as they did when they snubbed the Queen’s service this past Christmas, nobody’s talking about it.

Meanwhile, the couple’s "Scottish tour" around Glasgow turned into a fashion bust. Kate appeared in something called a "worker’s coat" that looked like a dishrag-dullish, messy-plaid minidress version of what ladies don when they go to the hairdresser’s for a cut and coloring. She teamed it up with opaque black tights, some high-heeled boots and, of all the weirdo things to carry along, a black evening clutch bag which she kept placing in front of the baby bump that noticeably isn’t there. She wore her hair in those gigantic sausage curls that cover her bosom. Her alternative outfit was a fire-bright red Armani coat recycled from her "Look at me, I am dating Prince William!" days, which she also teamed up with black tights, boots, the now-ubiquitous poky black clutch bag, black gloves, and a thin plaid muffler-scarf accessory predominantly in yellow (the sole purpose of which seemed to be to draw the eye away from the abdominal area where a pregnancy bump should be, and back up to Kate’s neck).

"A nod to Scottish tradition!" crowed those press writers determined to make a royal out of Middleton yet.

But a lot of Scots were left either scratching their heads, or laughing outright.

What’s plaid got to do with it?

Where’s the haggis breakfast? Where are the kippers? Where’s the genuine kilt? The true family wearin’ o’the tartan? And if Middleton’s goin’ to be wearin’ the tartan, pray tell us whose family tartan might it be? Where’s the heather? Where’s the sign of genuine Highland anything? Where’s the true love of Bonnie Scotland?

But William and Kate did get to meet Clyde, a gigantic humanoid Scottish thistle that serves as the mascot of the Glasgow 2014 Commonwealth Games. Clyde, it turns out, wanted to give Kate’s baby bump a friendly pat as they stood together in Glasgow’s new Emirates Arena for sports. Or at least, to pat her where that baby bump should be. That pat would have told us a thing or to! But no, twas not to be.

Instead of having the actual existence of the disappearing-now appearing baby bump confirmed by a friendly thistle pat, Kate pretended not to understand what Clyde wanted, and pulled away. The Daily Mail reported that Glasgow 2014's marketing manager, Samantha Jones, who was standing beside Kate and Clyde, revealed: "Clyde doesn’t speak but he was gesturing to Kate about her baby as if to congratulate her," and then he tried to "pat the bump." Even before Kate and William appeared, Clyde, Jones said, "was asking if he could pat the bump, but we told him no." But Scottish thistles are nothing if not persistent. Clyde started "signaling" to Kate about patting her alleged bump, and "she just laughed and said, ‘Oh yes, the baby. Thank you very much.’"

And then, Kate skedaddled away–clutch bag firmly in place.

But she didn’t get far. No sooner had Kate evaded the determined baby-bump patter then she ran straight into 11 year-old Dayna Miller, who confronted Kate with a Barbie-style doll "mini me" wearing an Issa-style blue dress. Instead of being gracious as the admiring little girl showed Kate her dolly, Middleton started screeching: "No! Oh, no! Is that me? Is that meant to be me? Does my hair really look like that?"

So much for getting down with the real people of Scotland.

One wonders what event has provoked this flurry of Highland visiting. Is another "well deserved" vacation on the horizon? Is it damage control against Kate’s Uncle Gary’s "Hello" interview and impending blabby book? Is it to defer attention away from sister Pippa’s new career as a writer of how to fold oriental pastries? Does brother James owe money again? Are parents Michael and Carole angling once more for aristocratic titles?

After Clyde the Thistle’s bump-patting rebuff, London newspapers started showing photos of Kate only from the sausage curls-up.

With less than three months left to go in the pregnancy, they are laying low, indeed.