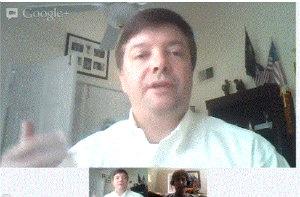 Stephen Sabludowsky and Jeff Crouere conducted their first Google Hangout on the occasion of the 11th anniversary of Politics with  a Punch, which the two have produced since its inception.

On tap of discussion were the news reports that the Boston bombers were planning to take their explosive road show to Time Square.  What should the country do considering the budget deficits to ensure security?  Who is to blame?

With an eye towards Louisiana, the focus turned towards Governor Jindal’s announcement that the  expansion of a  major methanol plant in Geismer Louisiana.  Governor Jindal has been on a tear, making economic development announcements, one after the other.  So, what’s in the governor’s future?
Politics with a Punch is again celebrating a milestone, the 11th birthday. The pair discussed the history of the program and what the crowd can expect tonight at the Eiffel Society in New Orleans.  Check out this link for more information and how you can attend.