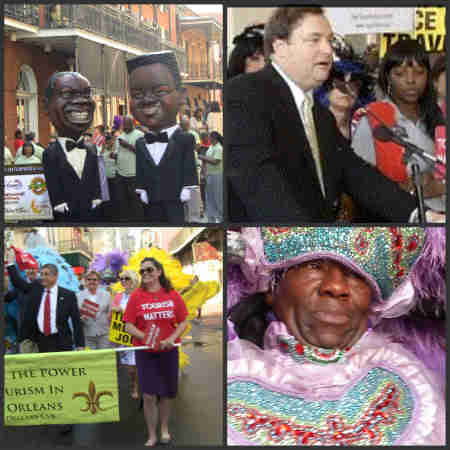 Tourism matters.  Especially for New Orleans and for Louisiana.

The city, on a Mississippi crescent in south Louisiana, has been home to the industry’s most desirous major events such as the Super Bowl, the NBA Final Four, and has hosted millions of tourists and conventioneers anxious to taste Louisiana seafood, dine in the world’s finest restaurants, soak up the region’s unique culture and attend world-class events.

On Tuesday, the New Orleans Convention and Visitors Bureau, along with its major tourism partners, joined cities across Louisiana and the United States to celebrate National Travel and Tourism Week.

The local celebration kicked off with a Mardi Gras-style parade in the French Quarter and ended with a rally in the courtyard of the world-famous historic Le Petit Theater.

This year’s Tourism Week event took on an even more special meaning as the city plans for its historic 2018 tricentennial, converts the World Trade Center at the foot of Canal Street into another magnificent 7th wonder of the world and continues with its record-setting tourism traffic, made so especially meaningful due to the devastations of Hurricane Katrina and the recent BP oil spill.

Perry and Rusovich emphasized the importance of funds for advertising and promotion for the region.  That debate is currently being held at the State Capitol in Baton Rouge with the Louisiana legislature hammering out a budget.

The event’s message was plain and simple: New Orleans is most-unique due to its culture, attractions, history and its people.  It is the heart of the region. In a global market, it is critical to attract an able and willing audience critical to the city’s and the state’s economic welfare.  Doing so requires investments in advertising and marketing which means reminding local and state  decision makers, that, indeed, tourism matters.