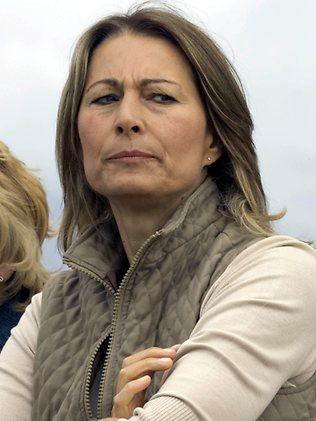 The British are getting tired and fed-up with the ever-maneuvering Middletons, especially with Mamma Carole Middleton, who is now trumpeted by none other than "Tattler Magazine" (a very upper-crust fusion of Vogue and The Enquirer) as being the new "power behind the throne," due mostly to her insistence upon controlling William and Kate, and now getting her talons into the new royal baby.

What throne is Carole said to be the power behind?

"Why, the porcelain loo!" sputtered one very aristocratic lady.

Exile is always a good idea. Not forever, but just for a while. For a bit. Handy for when things get too confused, too volatile, and need calming down. Keep your passport updated so that you can always come back, no worries, in a decade or two.

Here is a solution that takes the "M" out of "Middleton" and puts it where Prince William and his wife, Kate Middleton, should move to, for now: Malta.

Not as in the milkshake, either. Nope. Malta.

As in the Island of Malta, officially called "The Republic of Malta." It’s actually an archipelago of islands, big and small, but people live only on the largest three: Malta, Gozo, and Comino. Queen Elizabeth used to rule over it until 1974 and departed with independence on a good note, so there are strong British ties and lots of warmy-warmy feelings. It’s got everything that William and Kate so crave: White sandy beaches, blue lagoons, luxury hotels and villas, and lots of banks so that they can pick up their allowance each month. There are lots of English speakers so they need not be troubled to have to master a pesky second language, like Maltese (not the dog). It is close enough to Italy so that Kate can still fly over for a spot of shopping, and the new nursemaid slash housekeeper they’ve taken (on secondment from Her Majesty the Queen, not to be confused with Queen Carole of the Porcelain Throne), Antonella Fresolone, can visit her relatives.

Let Carole and Michael and Pippa and James go to Mustique all by themselves. And no need to sprint off expensively to the Seychelles. William and Kate can have Malta!

Malta may even make a special stamp for them if they move there.

It has great bus service, including a fleet of new "bendy busses" from London.

And it also has a large number of British retirees living there, who will all be most appreciative to have William and Kate being out and about.

Moving to Malta? It’s not exile, not exactly. But it does get William and Kate out of the public eye so that they can calm down, relax, not have to worry about William losing his helicopter-flying job and Kate not having to be photographed so much. They can just be themselves! They do not need to learn the names of the charities to which they purport to lend their patronage, they do not need to mystify the nation with whether Kate is naturally pregnant or not.

It has fantastic architecture, a semitic-based ancient alphabet, no fewer than nine Unesco World Heritage Sites, and fabulous prehistoric megalithic temples, so we know for sure that Prince Charles and Camilla will come visit occasionally (probably on their way to Turkey or Oman, or to Saudi Arabia to pick up the new jewelry), although Camilla will have to bring along one of her dainty sun-shade parasols because Malta is a sunny place. And best of all, Malta is part of the British Commonwealth so, for sure, William and Kate will be invited to things–cocktail parties, cutting ribbons, and they can probably even wave a magic wand around. Since Malta is historically the seat of the Knights Hospitaller, who pretty much ran the show in Malta until Napoleon captured it in 1798, and the newly-revived Venerable Order of St. John of Jerusalem, once brutalized by Henry VIII but reinstituted by Queen Victoria in a Protestant style and then an ambulance brigade, there are plenty of clubs, organizations, and secret societies to join and even of which to be patron.

William and Kate can be as busy as they want to be, if they live on Malta!

Malta is a good place for British Royals to stay awhile. Had the effusive Sarah, Duchess of York, lived there with her naval officer husband Prince Andrew instead of staying in London and chasing hunky and well-endowed men whenever Andrew’s ship left port (complaining all the while about how unappreciated she was), she would either have gotten into less trouble as a left-alone navy wife, or it would have been kept much quieter than it was. Because of its strategic position in the Mediterranean, the British have long had naval bases and other military bases in Malta. Queen Elizabeth herself, even before her marriage to Prince Philip and before becoming queen, joined her naval officer fiancé in Malta for periods between 1946 and 1953. They bunked in at Lord Louis "Uncle Dickie" Mountbatten’s magnificent rented home, the Villa Guardamangia, and reports say that Elizabeth enjoyed her life as a naval wife on Malta. Since Uncle Louis’s house still exists, and is a large house, perhaps William and Kate would like to see if it is still available for lease.

That would solve a lot of problems!

The island comes with good omens for the British Royal Family. Despite doing many decades of visiting and touring around the globe, Malta is the only place where Queen Elizabeth has ever lived outside of the United Kingdom. Had her father not died so young, many people believe that Elizabeth and Philip would have spent even more time on Malta. Some people doing the math believe that her eldest son, Charles, and the likely future king, was conceived there.

So there’s a link!

And here’s another link, showing then-Princess Elizabeth and Prince Philip on a balcony in Malta, in bright sunshine...and wearing clothing! http://www.youtube.com/watch?v=u-fdgN6uiKA.

And somehow, Charles was conceived in Malta without one single photograph of then-Princess Elizabeth and Prince Philip cavorting about, naked, on the balcony!

How the royals pulled that one off, we have no idea!

Malta is still so fond of Her Majesty that it issued a special commemorative postage cover for her and Philip’s Royal Diamond Wedding Anniversary. It includes a lovely 1947 wedding picture of them smiling radiantly at one another, and also a recent photo of them at their Uncle Dickie’s other house, Broadlands, where they officially honeymooned.

Now Romsey, in southern England where Broadlands is, is a lovely area. But Malta is the island of true royal love!

Put it this way: Malta is where the royal love-love happened!

And the Royals themselves know it. On her first official use of the Royal Yacht Britannia as Queen, she stopped in Malta with Prince Philip and their children, Charles and Anne. You can see it here at http://www.youtube.com/watch?v=hzsg8aqG9Mw. This visit, to honor the World War II Royal Air Force fighters who died defending Malta, was the first time that Charles and Anne had ever been out of the United Kingdom. But the stop also was a gentle, wonderful family trip full of wonderful memories for the Queen and her husband. She and Philip went again in 1967, and were greeted by 22,000 Maltese in Independence Square. More would have come, but that was the maximum number of persons that could fit. Watch it on http://www.youtube.com/watch?v=nCakhgAxYwI. Can William and Kate in their present state draw a crowd even remotely that large–other than the Royal Wedding? Malta might give them a friendly place to practice their "people" skills.

In 2007, Elizabeth and Philip stopped at Malta on their way to the Commonwealth gathering in Uganda, did some walk-abouts, and visited their favorite places.

http://www.maltamedia.com/artman2/publish/local/article_4154.shtml. The Queen smiled as happily as any young ingenue. http://www.youtube.com/watch?v=AwYrr7H-Kos. This visit to Malta was said to be Prince Philip’s idea. Even sixty years later, they could still remember their love!

Although Prince Charles and his second wife, Camilla, joined them in Uganda for that Commonwealth meeting, they could have also stopped in Malta! But on a second honeymoon, four’s a crowd...unless you’re the Middletons.

Malta: The place for William and Kate to hang their hats, escape from the Middletons, have lots of babies, do good charitable works, experiment with hair styles (nobody will notice), go shopping, fly the helicopters about, and stay out of Prince Charles’s and Camilla’s hair as they move into place to ascend to the throne.