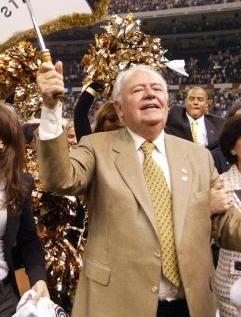 So the Saints signed their first-round draft choice, DB Kenny Vaccaro, last week. They followed that up with signing the rest of their draft choices at the team’s rookie mini-camp this past weekend, just two weeks after the draft. My only comment is: “Where’s the fun in that?”

Whatever happened to the days of first-round holdouts and charges that the team is “disrespecting me” with a low-ball offer? Don’t you miss the threats that the player will go play baseball or take up bullfighting or rake in cash as a croupier rather than accept the team’s generous offer to set him up financially for life?

You can blame the current Collective Bargaining Agreement for turning the draft choice signing drama into a Happy Days rerun. The CBA included a provision that basically formalized the long-time practice of “slotting” while helping protect the clubs from themselves. Slotting simply meant that the player drafted ahead of you received a bit more money while the guy directly behind you received a little less. Of course, since it was not a rule but a practice that evolved over the years, it included posturing and protests from preening agents who charged that their man should have been selected higher, ergo, he should be paid like the top five pick he shoulda been instead of the third-round pick he was.

As a long-suffering club negotiator, I prepared myself each year for the dance according to the history and propensity of my dance partner. Draft choice negotiations in the old days were like a dance where your partner always wants to lead and you are forced to follow, no matter whose toes get stepped on. "Dancing with the Stars" had nothing on agents who specialized in polarizing holdouts such as Leigh Steinberg, Eugene Parker and the Poston brothers. Those agents and a handful of others plotted their steps based on ego and how they could milk the situation for their own personal enhancement.

The worst thing an agent could do would be to come to a quick deal with a club, because other agents would use that against him when recruiting the next class of draft-eligible players. The bomb-throwers would claim that agents who reach agreement before the reporting date were in management’s pocket, which means that you, young Nimrod, will never get your true worth until management sweats. Of course, that was all  poppycock. Some agents ignored such criticism, and their players could be counted on to report on time.

I have chronicled on this page my signing of LB Brian Urlacher in Chicago in 2000. His agent demanded Urlacher sign before his wedding date in early July to avoid the community property laws. Prophetically, two years later Urlacher was divorced, but he kept his signing bonus. Drew Rosenhaus developed a reputation as a “shark,” which figured into the title of his book titled “A Shark Never Sleeps.” But Rosenhaus knew how and when to make a deal, having figured out quickly that the agent doesn’t get paid until the cash starts flowing. Oh, yes, and it also helps your player to have him in camp on time.

Some holdouts truly harmed the player’s career, and I can point to at least two examples in which I was directly involved, compliments of the aforementioned Steinberg and Parker. Steinberg held out DT Shawn Knight in 1987 when Saints GM Jim Finks was not going to pay one penny more than we had budgeted. Knight held out through training camp and finally signed when the season began. It became soon evident that Finks should have listened to personnel director Bill Kuharich, who wanted to draft OT Harris Barton. I will never forget one wag’s comment about Knight during a practice: “Look, Knight was knocked to his feet!” After two games, the players went on strike, and Knight never caught up. He was traded at the end of the season for Denver DT Ted Gregory, another bust.

I faced a similar holdout in Chicago when we drafted Michigan WR David Terrell, who was represented by Parker. Terrell was a big receiver, at 6-2, 220 pounds who had great numbers in college. Unfortunately, the scouts universally rated the reason as Terrell’s skills, choosing to ignore his college QB, the very under-rated Tom Brady. Parker refused to deal, even when those around the No. 8 slot were signing, and Terrell did not sign until missing most of training camp. When Terrell reported, he was wearing a mustard-colored suit, maybe he thought it was “maize,” which was the last time anybody noticed David Terrell. Another bust. Brady went to New England in the sixth round, reported to camp on time, and you know the rest.

Draft busts will still occur today, despite the new rules on rookie negotiations. But now busts will no longer be at the mercy of their agent’s desire to hold them out. They will now make it or not based on their ability. Either they are players or they aren’t, and that is why the new draft rules will help those players who before could not help themselves.

Jim Miller's book "Where the Water Kept Rising" is available at Amazon.com and local bookstores. And don't forget to click on his website, www.JWMIllersports.com.

WHO DO YOU THINK WAS THE NEW ORLEANS BIGGEST DRAFT BUST?  TELL US BELOW

More in this category: « Harris Poll: GOP Peaked Too Early In US Elections 2010 Louisiana Lt. Governor's Race: Dardenne Vs. Fayard Is Gender, Party, Region Showdown »
back to top