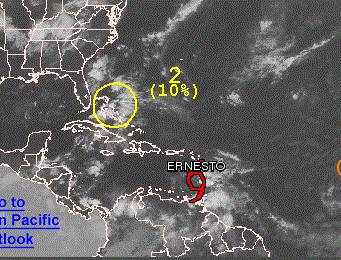 The storm has a sustained 50mph winds and gusts of 63mph.  It is zooming westward across the Carribbean Sea.

Here what various news reports are stating as of 12pm:

Several computer forecasting models showed it moving through or near the Yucatan Channel into the southern Gulf of Mexico in the middle of next week. It was too early to know whether Ernesto could disrupt oil and gas operations clustered in the Gulf.

August and September are usually the most active months of the Atlantic-Caribbean hurricane season, which runs from June 1 to Nov. 30.

"It's our first system coming out of the deep tropics this year, so maybe it's a good time for people to review their preparedness plans as we're getting into the part of the season where things normally begin to get a little more active," said David Zelinsky, a meteorologist at the National Hurricane Center.

Once it reaches the Gulf, computer models have Ernesto aiming anywhere from Central America to the Louisiana coast.

It was too early to know whether Ernesto could disrupt oil and gas operations clustered in the Gulf.

There's a big question mark over the Gulf of Mexico in a weather service graphic of the projected path for Tropical Storm Ernesto.

Once the storm enters the Gulf, expected to build into a Category 1 hurricane by midweek, it's anyone's guess where it could go.

The National Hurricane Center is tracking the storm as it heads into the eastern Caribbean Sea. It now boasts 50 mph maximum sustained winds as it strides toward the Gulf at a brisk 21 mph.

"The forecasts call for it to approach the Gulf of Mexico by Wednesday," said Waylon Collins, local meteorologist for the National Weather Service. "The hurricane center doesn't have a forecast beyond that."

It may be a good time to stock up on those hurricane supplies before it's too late, weather officials advise.

More in this category: « Louisiana’s teacher’s unions vouching for self-interest by thuggery against charter schools Chick-Fil-A day vs. gay kiss-in tasty treat for Election day »
back to top