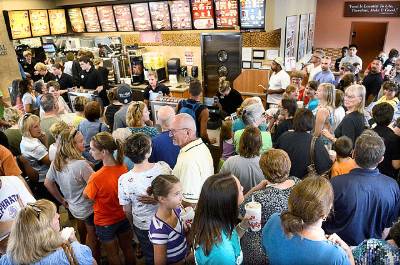 Millions of Americans registered their support for both free speech and traditional marriage by flooding over 1,600 Chick-fil-A restaurants across the country on Wednesday. Former Arkansas Governor Mike Huckabee’s idea for an “Appreciation Day” for the beleaguered chain was an overwhelming success. He said the massive turnout was “beyond anything I could have imagined” as it was a record breaking sales day for the company.

The whole controversy began when Dan Cathy, President and COO of Chick-fil-A, told the Baptist Press that he was “guilty as charged” in his support for traditional marriage. Cathy said the company is “very much supportive of the family—the biblical definition of the family unit.”

After making his innocuous comments, Chick-fil-A was criticized by liberal politicians in Boston, Chicago and San Francisco among other cities.  There were threats to prevent the chain from expanding and denunciations of the company as “anti-gay.”  Of course supporting traditional marriage is not “anti-gay,” but that did not stop Chicago Mayor Rahm Emanuel from claiming that the chain did not represent “Chicago values.”

Considering that Cathy operates his business on biblical principles and Chicago is one of the most violent cities in the country, most Americans would side with Cathy in a values showdown. Emanuel’s outrage was especially odd considering that he has welcomed to his city the anti-American, anti-white, anti-gay, anti-Semitic leader of the Nation of Islam Louis Farrakhan. Emanuel hopes to work with the controversial Muslim organization to fight the out of control crime problem in his city, but he refuses to welcome a company infused with Christian teaching. It seems that the city’s values are in serious need of adjustment.

Hollywood stars joined the fray and added vitriolic comments to the marriage discussion. The overrated and obnoxious Roseanne Barr even wished “cancer” on Chick-fil-A customers. The hatred from liberals helped spur Americans of many backgrounds to show their appreciation for Chick-fil-A on Wednesday.

These Americans represent a majority of Americans who are tired of being silent and are ready to take action. What began with the Tea Parties in 2009 and continued with the overwhelming GOP victories in 2010 and was on display Wednesday will continue with the defeat of Barack Obama and the Democrats in November.

The silent majority has been awakened. While a majority of voters were deluded in 2008 into supporting the candidate of “hope and change,” his glow quickly faded as people realized the scope of his dangerous policies.

Today, Americans who believe in traditional values such as marriage being the bedrock of the family unit are getting mobilized and are ready to vote this November. The results will be bad news for both liberals and establishment Republicans who are partners in the mess in Washington D.C. For evidence, look at the amazing victory of Ted Cruz in the U.S. Senate GOP primary in Texas on Tuesday.

For years, liberals have been forcing Americans to accept their politically correct religion of global warming, gay marriage, socialized medicine, and the welfare state. Despite constant bias and unfair treatment from the mainstream media, Americans in support of conservative values such as traditional marriage, individual responsibility, limited government and constitutional principles are fighting back.

The liberals have pushed the envelope too far. When Cathy announced his support for traditional marriage he was speaking for a majority of Americans. In all 31 states that have placed gay marriage on the ballot, the measure has lost. These Americans are not anti-gay or supporters of discrimination against homosexuals, yet they believe the definition of marriage that has worked for thousands of years is still appropriate especially in these troubled times.

Today, gay rights activists will hold their “kiss-in” at Chick-fil-A restaurants to protest Cathy’s stance. The participants will be few in number when compared to the millions who packed the restaurants on Wednesday. However, it will not stop the liberal media from highlighting the gay activists and elevating the significance of their protests. This will be in direct contrast to how the media downplayed the numbers who participated in the “Appreciation Day” on Wednesday.

Fortunately, more and more Americans are becoming wise to the liberal media bias and are discounting their unfair reporting.

The threats and biased treatment are no longer working, Americans have had enough of this agenda and will continue the mobilization from now until November 6, the day in which the movement will achieve its greatest goal, taking back this country.