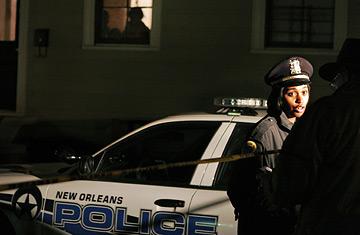 Unfortunately, this goal will be unattainable if more incidents like the Mother’s Day shooting occur on the streets of New Orleans. In an amazingly brazen attack, police claim that Akein Scott and his brother Shawn Scott, members of a vicious 7thward gang, shot 20 people at a second line parade.

This incident made front page news around the globe, sending a horrible message that New Orleans is a city awash in violent crime. This message is accurate for the city is nowhere close to getting a handle on the crime problem. For years, New Orleans has earned the disastrous title of Murder Capital of the nation. While the number of murders has declined in 2013, the number of people shot has not dropped.

On Sunday, no one was killed, but there could have been 20 dead in the hail of gunfire. NOPD officials are limited in their ability to provide security at such parades as there are too few police officers. There has only been one recruiting class since Mayor Landrieu took office. In that time, the attrition rate of officers has skyrocketed to approximately 100 per year. Currently, there are only 1200 members of the NOPD, while 1600 were on the force only a few years ago.

The administration is in the process of changing the detail policy, which will lead to more defections from the NOPD. In addition, the ludicrous policy of reinstating the residency requirement will drive more officers from the ranks of the NOPD.

While another new recruiting class is forthcoming, the situation will only get worse in the short term. When veteran officers leave, they take years of experience on the streets of New Orleans with them. It is a loss that cannot be replaced by a rookie just graduating from the academy.

While the NOPD is shrinking, the criminal population is robust in New Orleans. Lenient judges contribute to a revolving door criminal justice system. Akein Scott had been arrested numerous times, but his bail was set at only $15,000 after his last brush with the law. On Mother’s Day, he should have been in jail, not terrorizing a second line parade.

The Akein Scott story is an example of what happens on a continuous basis in New Orleans. It is quite discouraging for police to arrest a criminal and then have to face the same person the next day or the next week on the streets of New Orleans.

The answer is not providing midnight basketball in crime infested neighborhoods or giving criminals multiple chances to turn their lives around. The only answer is a return to strict law and order procedures in New Orleans. A deterrent must be established again in the Crescent City. Criminal penalties are much too lenient. For example, there have been 5,000 people murdered in New Orleans in the last two decades, but no one has been executed for those crimes. It is almost impossible to secure a death penalty conviction in a New Orleans court room. The death penalty can be a deterrent if it is used, but, in New Orleans, criminals are literally getting away with murder.

Until there is a functioning criminal justice system and an adequately staffed NOPD, there will be more incidents like the Mother’s Day shooting. This will continue to impact our tourism industry and cost the city millions of dollars as untold number of visitors will be scared to visit our city.

This issue needs the attention of city leaders because it is important to both public safety and our economy. Platitudes and soft headed approaches are not working, a hardnosed crackdown on criminals will be the only way to turnaround this situation.

While the NOPD needs to change their policies to improve retention of officers and recruit more officers, the only immediate answer is to invite the National Guard and State Police to the city. Their assistance is vital in the short term as it will allow an understaffed NOPD to focus on crime hot spots.

The image of these additional law enforcement and military personnel may be uncomfortable to some people but it is a lot more uncomfortable to be a victim of crime. Today, in New Orleans, there are too few police officers, too many criminals and way too many victims of crime. Unless this situation is changed, we can forget about reaching any of the far reaching tourism goals for New Orleans. Tourists like to visit safe cities, not ones unable to control violent crime.

DO YOU AGREE OR DISAGREE WITH THIS COLUMN?  TELL US BELOW...

More in this category: « LSU, Miles Pull One Out Of The Mad Hatter Vs. Florida Is Vitter's Illegal Alien Ad Race-Baiting Or A Welcome Sign? »
back to top