Bill Press's National Anthem Blasts Are Off Key, An Embarrassment 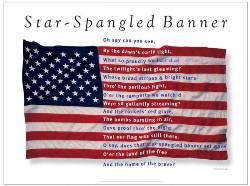 Before athletic contests and major events, audiences across America are treated to the National Anthem, the song known as the “Star-Spangled Banner.”

The inspiring lyrics were written by Francis Scott Key in 1814 while observing the Battle of Fort McHenry. Eventually, it was set to music and became our country’s National Anthem in 1916.

Sadly, this week, the “Star-Spangled Banner” was attacked by liberal talk show host Bill Press, who claimed the song was “stupid.”

Press is typical of liberals who want to attack our country’s traditions, such as the Pledge of Allegiance to the American Flag. These uniquely American traditions bring citizens together in the important activity of showing patriotism. These traditions play a vital role in unifying Americans during both times of peace and war.

Many liberals like Press believe showing patriotism is somehow inappropriate. Obviously they would prefer the U.S. to meekly follow dictates from the United Nations, become more global in outlook and tone down any nationalism.

He says he is “embarrassed” by the “military jargon” in the anthem. Yet, in his poem, Francis Scott Key was accurately describing the scene at Fort McHenry where he witnessed the “rocket’s red glare.” Military actions have marked the history of the United States of America, and success on the battlefield has allowed our country to survive, giving Press and other liberals the luxury to become offended by the anthem.

As part of his attack on the anthem, Press states that it is too difficult to sing. In reality, the “Star-Spangled Banner” is a beautiful song that can be performed magnificently. In 1991, Whitney Houston showed America her vocal talent with a mesmerizing performance before the Super Bowl.

Singers who have talent enjoy performing the National Anthem. Former American Idol finalist Ace Young said he is “proud and honored to sing it every time I am asked.”

If Press has his way, Young will not have many more opportunities to sing the National Anthem. “It is a major crusade of mine and that is to get rid of the ‘Star-Spangled Banner’,” said Press.

As part of his attack, Press said he is “embarrassed” by the lyrics of the National Anthem, which includes such stirring phrases as “the land of the free,” and the “home of the brave.” Press claims that he does not know whether America is the home of the brave, asking whether we are “the only ones who are brave on the planet?”

This man is a perfect candidate to host a new program on MSNBC. Who cares about the bravery of people in other nations? This song is about our bravery, our nation. Press displays an unsetting international, United Nations mentality, the type that is definitely harming America.

Americans should not have to take an international poll on the wording of our National Anthem. While there are brave people in all countries, this country was founded by the brave men who fought to insure this would be a free land.

We honor our Founding Fathers every time this anthem is performed and remind ourselves what is special about this great nation.

A fool like Bill Press is a hopeless case and someone who should probably move to a country like France. He would fit right in with a nation that just elected a socialist.

In the United States, we need to reject the socialism of countries like France and return to the values of our Founding Fathers, which are included in the rousing words of the National Anthem.

Bill Press wants to eliminate our National Anthem because it is a projection of unabashed patriotism. In his warped mind, the perfect anthem would be a song like “We are the World.”

Thank goodness most Americans disagree with this nonsense and realize that America was founded by brave men fighting for freedom, and the “Star-Spangled Banner” is the perfect song to reflect our glorious history.

Jeff Crouere is a native of New Orleans, LA, and he is the host of a Louisiana based program, “Ringside Politics,” which airs at 7:30 p.m. Fri. and 10:00 p.m. Sun. on WLAE-TV 32, a PBS station, and 7 till 11 a.m. weekdays on WGSO 990 AM in New Orleans and the Northshore. For more information, visit his web site at www.ringsidepolitics.com. E-mail him at [email protected]

More in this category: « Wisconsin elections, exit polls, and Louisiana's budget woes Rapper Lil Phat shot in Atlanta outside hospital after visiting baby »
back to top