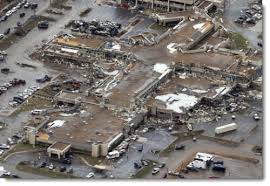 In spite of all the turmoil and tragedy visited on the little town of Moore, Oklahoma last week, one fact stands out:  Every family with a storm cellar survived.

No one who went to underground protection was killed or even injured. For the rest who tried to find protection above ground, it was a crapshoot.  So why isn’t it mandatory that all structures in tornado prone areas, especially schools and other public buildings, have storm shelters?

Moore is in the part of the country that is known as Tornado Alley and City planners, know well that “below – ground shelters are the best protection against tornadoes.”  Yet there is no specific building code that requires them.  On the City of Moore web site, the recommendations are quite clear in stating “every residence should have a storm safe room or underground cellar.”

Tornadoes are nothing new in this part of the country.  In the Moore area alone, four major tornados have hit since 1998.  In 201l, a major tornado swept through southern Missouri and Oklahoma causing some two billion dollars in damages.  In fact, some 22 tornadoes have struck in or near Moore, killing more than 100 people since the town was incorporated in1893, according to the National Weather Service.

So why are storm shelters not required where tornadoes are so prevalent?  One reason is cost.  A basic shelter can run several thousand dollars.  And a good number of poorer citizens live throughout this area.  There are federal programs that offer rebates for storm cellar construction, but the dollars are limited.  Yet spending  $2000 to save one’s life seems like a no brainer.  But there are also political considerations. Several Oklahoma legislators have introduced bills requiring so-called “safe rooms’ built with reinforced concrete, or better yet, underground shelters.  But they haven’t had much success.  “This is a red state,” said State Representative Richard Morissette of Oklahoma City. “People don’t like anything that is mandated. You don’t like it when the government says they have to do something.”

And most would agree.  That is, as long as the rest of us are not affected.  But as we speak, Oklahoma members of congress are adding up the damage and preparing to ask taxpayers to pony up for all the costs.  Initial estimates have soared past the $2 billon mark and are rising daily.  There will be a good bit of insurance coverage, but we can still count on significant federal dollars to be asked for and paid by – you and me.

The question then becomes one of whether it’s reasonable that a community or state meet certain construction standards in order to be eligible for federal funds.  Without some reasonable mandates, do we stand by and let areas of the country prone to weather related damage come to congress time and time again without them taking measures to mitigate the damage that they know, sooner or later, is inevitable?  This is an issue that many areas of the country face, including the entire Gulf Coast and particularly my home state of Louisiana.

In years past, many Gulf Coast residents passed on flood insurance, did not consider building code requirements, and waited for FEMA dollars to help rebuild their homes or businesses. Back in the 90s when I served as Louisiana’s insurance commissioner, I had a fellow stop me one day and ask about my projections for the coming hurricane season. “I hope we get one down here this year,” he told me. “We sure could use some of that federal money to fix up my fishin’ camp.”

That was the attitude along the Louisiana coast, in Moore, Oklahoma, and up along the New Jersey shore.  That’s what the federal government does. Fix things up because that’s how the system works.  But the rules, for good reason, have changed. In Louisiana and other hurricane prone states, new building codes have been put in place. There are requirements that if you live along heavily flooded areas, you are required to build your home high off the ground.

And if you don’t, there are consequences.  You will not be eligible for federal flood insurance.  There is no private insurance to cover water damage from floods.

A homeowner’s only option is to buy federal flood insurance.  And quite frankly, if you live in a flood prone area down in this part of the country, you’re crazy if you don’t.  Many lenders will refuse to makes loans on a property that doesn’t carry flood insurance and that has failed to adhere to recent stronger building codes.  And many insurance companies still require inspections to be sure the property has followed all these new requirements.

These new requirements are reasonable and just.  It would not be fair for the rest of the country to continually pick up the cost of rebuilding weather damaged areas, if people living in those areas are not willing to reinforce and mitigate so as to limit future damages as much as possible.  So if such requirements are reasonable along the Gulf Coast, then aren’t similar rules and codes totally justifiable in Tornado Alley?

The property owner is free to choose.  Ignore such mandates if you will.  Don’t let the government tell you what to do with your property, but then don’t ask the government for a federal handout if your property is damaged.  If you want taxpayers all over America to lend a hand, you have to do your part and follow the rules.

In the Wizard of Oz released seventy-four years ago, Auntie Em and Uncle Henry knew that when an Oklahoma tornado is coming your way, you head for the storm cellar.  Dorothy didn’t make it.  Neither did many of those who had no storm shelter to seek out in Tornado Alley.

“And suddenly a great wind came from beyond the desert construct the four corners of the house, so that it fell upon the young people and they died; and I alone had escaped to relate these things to you.”    Job 1:19

Jim Brown’s syndicated column appears each week in numerous newspapers throughout the nation and on websites worldwide.  You can read all his past columns and see continuing updates athttp://www.jimbrownusa.com.  You can also hear Jim’s nationally syndicated radio show each Sunday morning from 9 am till 11:00 am, central time, on the Genesis Radio Network, with a live stream athttp://www.jimbrownusa.com.