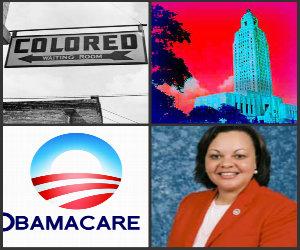 The Louisiana Sen. Karen Carter Peterson Obamacare controversy, in which she that the opponents to Obamacare in Louisiana are motivated by race has not only made big news statewide but nationally.

The Louisiana Republican Party and Gov. Bobby Jindal, though to have had their share of difficulties these two months of the Louisiana legislative session, have seized on the opportunity created by Peterson with her statement last week in front of the Louisiana Senate.

There are many questions related to this current controversies: how will it affect the Democrats chances to regain power in an already raw-red republican state? What were some of the short-term effects? Did the Republican Party store the controversy, play the race card of its own and in doing so fan the flames of race animosities? Also, since the Republicans have been asking Mary Landrieu whether she supports the Peterson statement, what should the Louisiana Democratic senator do in light of this controversy. Landrieu has already been considered to be very vulnerable this election season. She is running for reelection next year?

Bayoubuzz.com publisher Stephen Sabludowsky, Jim Brown and Jeff Crouere discussed some of these issues and more in a recent Google hangout.
Watch the video below at the bottom of the article
TAKE THE POLL ON THIS ISSUE, BELOW

More in this category: « Louisiana, US To Pay Price For Obama's Tax Plan Crouere Looks At Louisiana's Lt. Governor's, Senate and Congress Elections »
back to top