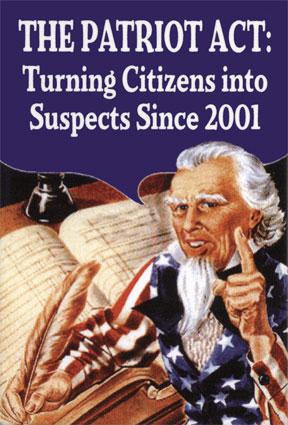 The whistleblower who divulged to Americans the massive surveillance program operated by the National Security Agency (NSA) is now on the run. He has left his Hong Kong hotel and may seek refuge in Iceland or another country. Even Russia is considering offering asylum to this courageous American.

By revealing the secretive and illegal spying operation that is ongoing in the United States of America, Snowden realizes that he may never see his native land again. Some members of Congress, such as House Speaker John Boehner (R-OH) believe that Snowden is a “traitor.” U.S. Senator Dianne Feinstein (D-CA) said that Snowden committed “treason.” Such talk is nonsense for Snowden is far from a criminal, in fact, he is an American hero.

He has sacrificed his career and his personal life to strike a blow for freedom. Snowden realizes that by releasing this explosive information, he will be a wanted man, who will be tracked by the FBI for years to come. As a patriot, he placed the interests of his fellow Americans over his own well being.

He understood that this vast snooping program being operated by the NSA is an assault on the 4th amendment, which states that “the right of the people to be secure in their persons, houses, papers, and effects, against unreasonable searches and seizures, shall not be violated, and no Warrants shall issue, but upon probable cause, supported by Oath or affirmation, and particularly describing the place to be searched, and the persons or things to be seized.”

Under the NSA spy network the 4th amendment, which protects against government seizures without warrants, is being totally ignored. In fact, it is surveillance beyond anything authorized by the Patriot Act, according to one of the co-authors of the bill, U.S. Congressman Jim Sensenbrenner (R-WI).

According to Snowden, the PRISM program illegally accesses Internet communication by millions of Americans. Information is being regularly supplied by major Internet sites such as AOL, Yahoo, Google and many others. It is clear that nothing Americans write online is private any longer as our government has declared war on privacy and won.

The Patriot Act was passed in 2001 in the aftermath of 9/11. It was approved by Congress as a weapon to fight terrorism, not spy on average Americans. In a quest to provide security, our government cannot trample on the U.S. Constitution.

Sadly, the American people are in the dark about the dangers of the Patriot Act. We have been misled from the act’s inception in 2001 and the lies are continuing today. For example, the National Director of Intelligence, Benjamin Clapper, told Congress in March that the NSA does not collect information on the phone calls or Internet activity of average Americans. U.S. Senator Ron Wyden (D-OR) claimed that Clapper misled Congress and he has called for new hearings.

We have been given lies by our leaders because the truth is so awful. We are living in a Matrix built on the need to provide security. At this point, Americans can still choose whether we want a police state or freedom. Do we really care about freedom or just care about security?

In a free state, there will always be risks; we have to accept that reality. However, it is much better than the police state that our nation has become. We have cameras everywhere, drones flying overhead, the NSA compiling phone records and accessing Internet communications.

At this point, Americans should unite to fight this battle. We cannot continue to sit back and allow our government to accumulate tyrannical power. It is a death sentence to our constitutional republic and it is irrelevant which political party is in power.

The U.S. Constitution needs to be protected regardless of whether a Democrat or Republican is in the Oval Office. The sad reality is that both parties have contributed to the total mess that we now have to endure.

Republicans supported and passed the Patriot Act during George W. Bush’s first term. Under Obama, it has been expanded and become a dangerous tool of a government hell bent on encroaching into every area of our lives.

Today, we need to draw a line in the sand right now and say no more. We must implore Congress to rescind the Patriot Act and take a stand for freedom. Otherwise the security state will continue to intensify and show poor results. It is interesting that with all of these high tech tools, we were unable to prevent the horrific Boston bombing or the Fort Hood attack.

As we have seen in the recent scandals involving the IRS and the Department of Justice, Americans cannot trust our federal government. The information collected by the NSA could conceivably be used to intimate and harass Americans who oppose the administration in power.

The recent scandals remind us that the government has not “earned our trust” and could easily become “an electronic mafia with almost unlimited power.” As Snowden noted, the NSA can “quite literally watch your ideas form as you type.”

This is beyond scary, it is downright chilling. Unless we take action, America will become the type of totalitarian country that our forefathers fought against in WW II. This will disgrace not only their memory, but also future generations.

Clearly if America is to continue to be the “land of the free,” this cannot stand.