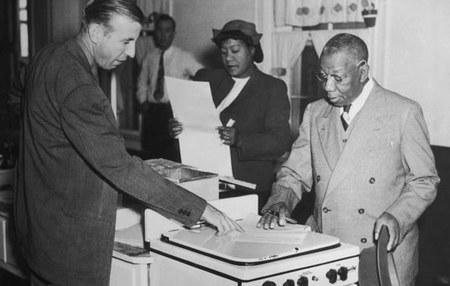 On Tuesday, the United States Supreme Court effectively struck down the Voting Rights Act passed in 1965.

Under the Voting Rights Act, nine states were required to obtain permission or “pre-clearance” from the Justice Department or a federal court before making any changes that affect voting. That’s even the slightest change.  If a voting booth was to be moved a few feet, pre-clearance was necessary. So before this week’s court decision, federal law required that the federal government must look over the shoulders of these nine states because state and local officials could not be trusted to abide by the law.

You may wonder whether institutionalized acts of racism are interwoven in Louisiana’s election procedures.  Is there a concentrated effort on the part of Louisiana elections officials to put up barriers so that it is more difficult for minorities to vote? The Louisiana congressional delegation must think so. Those in office back in 2006, when the Voting Act was re-authorized, voted in lockstep with a large majority of congress to keep Louisiana and a handful of other states under constant federal election watch, branding them as second class states when it comes to running elections.

Republicans and Democrats alike (including then Congressman Bobby Jindal and current Louisiana U.S. Senator Mary Landrieu) virtually sent a message that Louisiana could not be trusted to run fair elections. The other states on the list include Alabama, Arizona, Alaska, Georgia, Mississippi South Carolina, Texas and Virginia.

The federal restrictions are also a waste of time and money. I served as Louisiana’s chief elections officer in the 1980’s, all part of my job as the elected Secretary of State. During that time, there was not one case were elections officials were involved in any questionable activity that compromised the elections process. Not one. I had personally discussed this burdensome process with all five Secretaries’ of State who followed me in office, including current incumbent Tom Schedler, and each confirmed that there were no complaints of voting violations filed with the Justice Department. So what we have in Louisiana is a situation where there are no problems, no election barriers, and no discrimination, just a burdensome federal bureaucracy to deal with.

Certainly there were problems of voter discrimination throughout the south back in the 1960s. And there is a basis for the federal government to intercede when barriers are set up to keep certain groups from voting. The 15th Amendment to the US Constitution, ratified five years after the Civil War, guarantees the right to vote regardless of “race, color, or previous condition of servitude,” and grants congress the enforcement power. That didn’t stop a number of states, in both the north and south, to put up road blocks that included literacy tests, character requirements and other pretexts to keep primarily African Americans from voting. And Louisiana was as creative as any other state in either prohibiting or controlling the voting of minorities. Thus, the Civil Rights Act of 1965.

But it’s a different world in the Bayou State today, where black and white voting registration rates are virtually identical.  30.6 % of Louisiana’s population is black, but African Americans make up 31% of total registered voters. Of Louisiana’s five largest cities, four have black mayors including, Baton Rouge and Shreveport. Yet by keeping Louisiana restricted with the egregious voting rights provisions, congress made a finding that the sovereign dignity of Louisiana is less than that of the majority of other states.

An obscure Alabama court case was the catalyst to bring Louisiana and the handful of other states affected up to equal footing with the rest of the country. Arguments were heard last month before the U.S. Supreme Court on the propriety of voting rights requirements in the local Alabama town of Calera, which lies within Shelby County. Though the case involves a small jurisdiction, The New York Times pointed out that the implications stir up “a fascinating brew of two of the most freighted issues in constitutional law, race and federalism.”

One of the knocks on Louisiana is the lack of white votes received by President Obama in the past presidential election.  Obama won 14% of the white vote, down from John Kerry’s 24% in 2004. This was the biggest drop off in the nation, and The New York Times cited this figure as one more reason to keep the Voting Rights Act intact.

“…Despite his strong national margin of victory — and hefty campaign chest — Mr. Obama got only about one in five white votes in the Southern states wholly or partly covered by the Voting Rights Act. And there is every reason to believe that minority voters will continue to face obstacles at the polls.”

In other words, according to the Times, the fact that only a small percentage of white voters voted for Obama shows that the system in Louisiana deters black voters from voting. This of course is a ridiculous effort to find correlation in the inclinations of whom you vote for and the process itself. There is no such correlation.

Unfortunately, it took this week’s Supreme Court decision to give Louisiana voters the fairness that congress, including members from Louisiana, failed to provide. If our own congressional delegation thinks we are a second rate state and cannot be trusted with seeing that fair elections take place, is it any wonder why the rest of the country holds Louisiana in such low esteem?

“Oh Lord, please let me die in Louisiana, so I can keep on voting and be active in politics.”

Jim Brown’s syndicated column appears each week in numerous newspapers throughout the nation and on websites worldwide.  You can read all his past columns and see continuing updates at  http://www.jimbrownusa.com.  You can also hear Jim’s nationally syndicated radio show each Sunday morning from 9 am till 11:00 am, central time, on the Genesis Radio Network, with a live stream at  http://www.jimbrownusa.com.