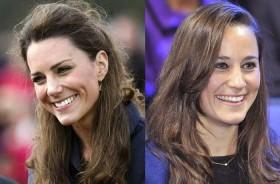 Kate Middleton’s skirt did not fly up over her head, or expose her derriere or other nether regions at last weekend’s wedding of wealthy aristocrats Lady Melissa Percy and Thomas Van Strawberry.

I still think his name sounds just like "strawberry," though.

The way you’d say it if you have a cold and are badly congested.

Which is not as quirky or memorable as Count Chocula, although they both sound like sugary breakfast cereals of which I am still quite fond.

Anyway, although the northern winds blew gustily and the bride’s veil and voluminous white gossamer gown billowed in the breeze, Kate Middleton’s skirt did not fly up her backside nor her frontside because...well, because she wasn’t there.

No. Kate did not venture with her husband Prince William and brother-in-law, Prince Harry to the nuptials of the far north because, she says, she is afraid that she might give birth prematurely, and she wants to stay close to Bucklebury. Some people say it is because the surrogate hiding in the Middleton’s spare bedroom is getting noisy and demanding as the date of her induction grows nearer–as truly pregnant women are wont to do.

But I don’t believe that!

Kate clearly needed to rest, having just completely spent herself by cracking a champagne bottle up against an ocean liner recently. In honor of her English heritage, she wore a tattery, tentish full-sleeved toga made from the skin of a spotted dog, in the best tradition of Sutton Hoo.

But it looks just like a spotted dog to me.

I was disappointed that Kate did not go Sutton Hoo all the way, paint her face blue, and wave a blood axe about.

But instead, she just wore the skin of a spotted dog. Just like she wore a kind of disappointingly muddy, dour green coat but pinned the shamrocks to it a while back. Kate only goes all the way when the wind is blowing about, or when she’s naked on a French balcony.

Spotted dog is what she wore. Spotted dick is a pudding. Both seem quite traditionally English, but just like with Van Strawberry and Count Chocula, you have to keep them straight or it gets so confusing.

A Daily Mail photo of Kate clad in her spotted dog togs, letting the bubbly bottle loose and then standing back, into the wind, showed her long, brunette hair and rumored extensions flapping about in the wind as the men standing behind her cowered and took cover for fear of a tresses-lashing. Boudica driving forth on her chariot, wild-eyed and wild-haired, wearing a cape of spotted dog, comes to mind. But this past weekend, for the grandest, highest-society wedding of the season, Kate stayed home with her spotted dog outfit, no doubt tucking into some spotted dick from the fridge, uh, uh, uhm...what did I just right? So innocent and, yet, so....so like something that a good dollop of Van Strawberry on top can make so much more tasty.

And it was a miracle that her sister, Pippa, made it to the Northumberland ceremony of her old beau, Percy’s sister and Van Strawberry because, well, because it looks as though Pippa surely survived a terrible accident on her way there.

After having gone to all the trouble of making herself a vintage 1980 peplum dress out of Mama Carole’s guest room curtains (note to Pippa–quickly dash off an article for VF about exactly how you did that), Pippa must have certain run afoul of a renegade truckload of leaky fountain ink pens, or else plowed her car into a double-parked paint truck, which then splattered ink and/or black paint all over her.

And then, some kind of errant, exotic bird, probably blown off course from the warm Caribbean trade winds of the West Indies, ended up crash-diving into Pippa’s head, leaving only a handful of large, spindly tail feathers poking out from Pippa’s skull. It looks as though the doomed bird’s head just disintegrated on impact. But the girl is so inventive! She just wore it as a hat. Oh, wait, as a fascinator. And I must admit that calling Pippa’s head-thingy a "fascinator" is indeed apt! It is rather fascinating to stare at a dead, feathery bird smashed into someone’s head that they are wearing as a hat.

Make do! Write an article about it! Build a career!

And by all means, wave to the adoring crowd! Which Pippa did as she walked about the Percy’s path between their castle and the church they own: "Hello, peasants! I am the sister-in-law of Prince William! You may pay me homage now!" Of course, this particular group of peasants belong to the aristocratic Percys, so some may have thought that Pippa was tipping her hand just a bit.

But most people didn’t want to say anything because they could easily see that Pippa was wearing an ink/paint splattered dress and a feathery, giant bird had blundered into her head, and so they were probably just hoping to lead her into a quiet, dark corner of the castle somewhere, feed her some spotted dick with a dollop of Van Strawberry on top, and call a cab.

Pippa’s peasants are in Bucklebury, awaiting their lady’s arrival. She can wave to them in her inky-painty-splottered garb, show them the dead bird in her head, and then go home to greet the surrogate and count down the days until the real drama starts.

It will be a first!

More in this category: « Landrieu Blocks Obama’s OMB Nominee Due to Oil Drilling Moratorium Louisiana Ballroom Dance Performances Event To Be Held In Kenner Mall »
back to top