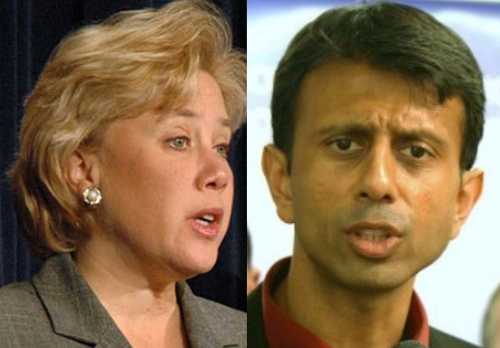 The Louisiana political world has been abuzz over the prospects of its Governor, Bobby Jindal, and its senior Louisiana Senator, Mary Landrieu, bumping heads in an upcoming Senate race.

Jim Brown, raise the prospect of this match a few weeks ago in his Bayoubuzz column. When I first read it, I wondered at the time, what brand is he smoking?

However, since then, no less than the wise political sage, John Maginnis, opined that Jindal should and must run against Landrieu. Since then, the talk has been the main game in town, especially since the Saints and the Tigers are still hibernating.

Of course, right now, Landrieu does have at least one acceptable opponent, seemingly backed by the Louisiana Republican Party, that is--Congressman, Bill Cassidy. The fact that Cassidy hasn’t caught on fire and that most voters in the state are more familiar with "Duck Dynasty", lends the prospect that the two most recognized political figures in the Sportsman’s Paradise could be gunning for prized-political game over the next year until election-day.

Both politicians have national recognition. Landrieu, is known throughout the nation primarily because of her vote on Obamacare or better known as the Louisiana Purchase. Jindal, is another story. His failed attempt to be president, vice president and his failure as Mitt Romney’s loyal soldier is well documented. He has called his own party “stupid” and “bedwetters”.   Depending upon the day, it is uncertain if Jindal is fighting the Tea Party or serving them sugar.

Although Jindal has quite chilly poll numbers lately, he has one major advantage— his opponent be would be Mary Landrieu.

Landrieu has won three close elections he but has never run against a Bobby Jindal. The governor could raise money from his fellow Republicans in the state. He could also hit the jackpot from outside contributors who smell victory in this blood-red republican state . The prospect that Jindal would become a US senator probably would not please many local and national Democrats, but the pro-Jindal, anti-Landrieu money campaign loot could flow plenty. Plus, Jindal has become a familiar TV personality and a frequent contributor to Politico and other national publications looking for some exciting irrational rants.

Thus, Jindal, who is now reintroducing himself on a campaign tour around the state, could easily raise a lot of money. He would also link Landrieu and Obama at the hip. US Sen. David Vitter wrote the playbook on how to run against a “ team Louisiana Democrat-Obama” when he trounced Congressman Charles Melancon a couple of years ago.  Jindal will figuratively (and perhaps literally) place Obama’s head on Landrieu’s body throughout the upcoming election season.

To his discredit, despite his own self-promotions, Jindal does not have a sterling record as governor. So far, the national media prefers to believe the Jindal propaganda machine rather than the Louisiana voters with whom have grown tired of his snake oil.

Indeed, a Jindal versus Landrieu election would get a tremendous amount of national press, would excite the Louisiana voters, and in a year when the president is not on the ballot, could actually bring out the lethargic masses who have sleep-walking since the that infamous BCS-like, David Duke vs. Edwin Edwards national championship match.

Ultimately, those conservatives who have hated Jindal, probably dislike Landrieu more. Landrieu, would not only need to stir up her base but would need to pull away enough anti--Jindal disbelievers to win her fourth crown.

A Bobby Jindal versus Mary Landrieu campaign competition would make for great theater. I’m ready for the this show to start. Would somebody pass me the popcorn, please?