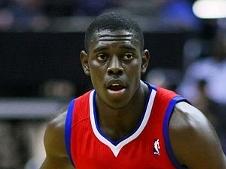 As you might expect, when NBA Commissioner David Stern announced that the Pelicans drafted Kentucky center Nerlens Noel with the sixth pick, I jumped up, thrust my fist in the air and danced a whirlygig.

Honest! You can ask the lovely Miss Jean and her mother who were amused witnesses. Well, I’m sorry, but the prospects of having Nerlens in N’Awlins alongside Anthony Davis and reserve Darius Miller put a definite Wildcat stamp on the local pro team. I was even thinking about buying tickets. But then, one small cloudburst of reality appeared and rained on my parade.

This is the NBA, not the NFL, and they do the draft differently over there. Sure enough, it wasn’t long before word came that the Pelicans shipped the rights to Noel to Philadelphia for All-Star point guard Jrue Holiday. Not only that, but the Hornets also gave the Sixers next year’s No. 1 draft choice, so long as it isn’t a top-five lottery pick. Two first-rounders for a player? That just doesn’t happen in the NFL! And then it came to me: You can’t look at the NBA draft through NFL eyes. The value of an NBA first-rounder is not the same as the value of an NFL first-rounder. It is not that the NBA pick has less value, but it has a different value.

Looking through the traditional NFL glass, you could say that Michigan’s Trey Burke would be a natural selection for a team desiring a point guard. But in the NBA, a new player fresh out of the box, is less ready to step in and help a team win. That goes double this year, when most of the eligible stock had questions circling over them like buzzards over road-kill. Noel, probably a dead-lock keeper in another year, is recovering from an ACL injury and might not be available for much of the season. Anything that impedes a player's development ripples into future years. Most of the other drafted players will take time learning their NBA craft, which is a far different game than the one they have played until now. Even as solid a selection as Davis last year struggled at times with bigger defenders and nagging injuries over a gruelling 82-game schedule.

I was in Chicago in 2001 when the Bulls acquired Tyson Chandler, the first overall pick, in a trade with the Clippers and then drafted Center Eddy Curry with the No. 4 pick. Matching those young high school “twin towers” with Scottie Pippen sounded like a great idea. What followed, however, were seasons of 21-61, 30-52 and 23-59 before they achieved respectability.

The NFL spends millions scouting players who fit their program and schemes. Learning curves and rookie gaffes can be ironed out during four days of practice and film study between the 16 games. The NBA does not have that luxury. Rookies are prepared as well as possible before the season, but once the ball goes up, they are learning on the run.

His new book, "Where the Water Kept Rising," is available at Amazon.com and at local bookstores. And don't forget his website: www.JWMillerSports.com