Cool Kate Middleton might give birth to the future "Air" conditioner 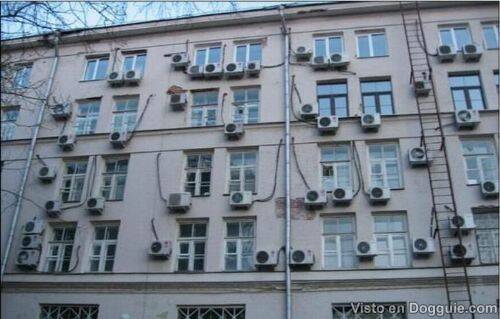 Kate Middleton, supposedly due to give birth today, is on the move.

But not to St. Mary’s Hospital in Paddington, where she is supposedly scheduled to give birth.

Kate has gone back to Bucklebury.

Sources alleged "close" to Kate, Prince William, and the rest of the irrepressible Middle ton "gang" say that Kate is on the move because she’s hot, the weather in London is hot, and her mini mansion, Nottingham Cottage in Kensington Palace, has no air conditioning.

Wow! Who knew that? All those millions of pounds, millions of acres of land, unimaginable art, farms, a kazzilion’s worth of unimaginable wealth supposedly possessed by Queen Elizabeth and her family, and...and...Kate has to go to her parents’ home in Buckelbury because they have air conditioning, and she’s feeling hot.

No wonder Her Majesty the Queen heads for chilly, rainy Scotland during the summer!

Ah, now I see why there is always such a big fuss over being in Balmoral in the summer.

Balmoral, in the Scottish highlands, was once described by the late Princess Diana in two words: "Boring. Raining." But surely, those two words are unfair. One thing for certain, though, is that it is cooler there than in London. And if there is NO air conditioning in Buckingham Palace, Kensington Palace, or St. James Palace, well, what is a pregnant lady to do but run home to Ma and Pa Middleton, sit next to the window unit, and put up her feet?

I guess the only other thing that Kate Middleton might do is to ship herself off to Balmoral, stay cool, be bored, and have the baby be born in Scotland, which would be a nice-enough nod to the late Elizabeth the Queen Mother’s Scottish heritage.

Ah, but the Middletons aren’t into the "other" family. You know, the genuinely royal one.

No, the Middletons are now presenting themselves as the "saviors" of the genuinely royal family.

Which is quite different from what I remember my own father telling me, when my air-con-do coughed up a death rattle and finally died one blistering summer: "You want to do what?? Move back where?? Don’t you have a job, girl?? Aren’t you all grown up and married now?? Don’t you have enough money to buy yourself your own air conditioner??"

And Dad was right. I mean, how much would a single little window unit cost the grand Duke and Duchess of Cambridge, anyway?

Not much. And one or two of these window units might do the trick, if they also pick up a nice rotating fan or two. Kate could also turn off the lights a bit, and stop doing all those pregnancy exercises we all hear so much about from her dearest friends who leak to the press. Stop making pots of chile and hot soup! It’s summertime!
Or Kate could ask the Prime Minister to please put in an appeal to Parliament for some brand new air conditioners.

Or, there’s always my Dad’s idea of...buying your own air con do.

Yes, the mini mansion called "Not Cot" might be made icy cool and completely habitable just by going to the appliance store, buying the biggest, bloodiest-coldest air conditioner in the place, arranging with the palace body guards for the delivery van to get through (the truckers may charge extra for that), and then paying a few quid to some fellah handy with a screwdriver lounging around to put the xyz thing in the window.

No Ma and Pa Middleton necessary!
And it's so much cheaper than a week in a private villa in Mustique!

And Kate and Prince William could then actually recoup all these costs by simply getting a footman or ladies’ maid to leak the story to the Daily Mail, and creep back to Kensington and let the scullery keep whatever is left over from the purchases. That should be thousands of pounds, so it’s all a win-win.

In a real pinch, Kate could go to a fresh fish store, buy a large block of ice from them, place it in a bucket, and position a rotating fan over it to blow the cooling air about her bedroom. Prince Charles might like that because, well, talk about a tiny carbon footprint!

Can I solve all the problems of the world or what?!

Of course, the "Birth Truthers" surrounding Kate Middleton’s decidedly odd and unusual pregnancy are pouncing on Kate’s refusal to go to Costco or Walmart or wherever it is in Merry Old England that people shop for air cooling devices. The Birth Truthers now claim that Kate’s need for air conditioning is just a ruse to get back to Bucklebury, where the pregnant surrogate is chained up in the attic.

The Birth Truthers believe that, somehow, a "home birth" at Bucklebury will be arranged, another baby produced from the Costco or Walmart or wherever it is in Merry Old England that people shop for live, newborn babies to be used in "happy mommy" photographs, and then this baby-prop will be used for just a bit until the real surrogate gives birth, and all will be well.

What will happen to the surrogate is something the Birth Truthers are not yet prepared to say, except for two little words: "Dead. Nurse."

Now, that’s a screenplay! I hope it’s not true.

But the Birth Truthers insist that this is the real story.

Me, I am just happy to have an air conditioner!  When I turn it on, I feel just like I am in a private villa in Mustique, feeling the ocean breezes blow through my hair.  Now, if I could just get someone to peel me a grape...
Can I solve the problems of the world or what?!
by Sarah Whalen
Tweet
Tweet
Published in Latest Buzz