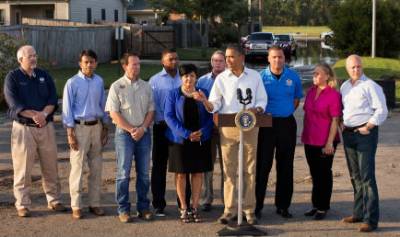 It has been an interesting political spring and summer.

Over the past month, one of the biggest stories in Louisiana politics was the House of Representatives tweaking Governor Jindal, in an effort turbo-charged by democrats and republican conservative fiscal hawks. The result were drastic cuts in which Governor Bobby Jindal has received much of the blame. On top of that, the House staged a mini-revolt.

In addition, while the U.S. Senate race is set for next fall, let’s not forget the gubernatorial election in 2015.

One of those politicos, who has a long memory for the Louisiana past and a sharp acumen for the future, is pollster, Bernie Pinsonat, President of Southern Media and Opinion Research Inc, who has much to say about the legislative past and the election gambits of the upcoming governor’s race.

In the second of our “Bernie burns” offerings, Pinsonat provides keen insights as to the hubbub and the hubris, in this interview below:

The House of Representatives has revolted against the governor. For the first time in decades, the House mustered enough support to approve a special veto override legislative session. The House is controlled by the Louisiana GOP. The Senate refused to support such a special session, thus killing it. What is going on, in your opinion?
The governor chose to focus on the senate – it is much easier to lobby thirty nine legislators in the senate rather than one hundred and five in the house. It is not unusual for house members to leave town on vacations and not bother to mail in their ballots – some even simply forget. When no one from the fourth floor or the speaker’s office calls them – it can’t be too important. House members knew a vote for special or veto session was not going to pass the senate. Governor Jindal has the equivalent of the New York Yankee pitcher Mariano Rivera presiding over the senate – John Alario – the ultimate closer! Governor Mike Foster seldom, if ever, expended any energy to stop anything in the house – he totally controlled the senate! To claim house members mustered enough support to call a special session is a stretch – if Chuck Kleckley and Governor Jindal had put on a full court press aimed at republican house members – I am confident the house republicans and a few democrats would not have voted for a special session. Plus, such an effort would have cost us tax payers a small fortune.
The house of representative was a fractured bunch this session. The so-called fiscal hawks teamed up with white democrats and the black caucus in the house to deny Governor Jindal passage of his budget. The most amazing twist of events happened after the session ended. The hawks with the aid of democrats inserted language into the budget forcing Governor Jindal to cut an additional twenty million plus dollars more than he proposed in the very budget the fiscal hawks and democrats rejected. Governor Jindal gets roundly criticized for these budget cuts to health care that was forced on him by the hawks. The group most critical of Jindal’s cuts to the health care budget was of course democrats in the house. Ironically it was the house democrats who enabled the fiscal hawks with enough votes to force Jindal into additional cuts that he did not ask for in his budget! The fiscal hawks are quick to call for additional cuts but very short on specifics. Fiscal hawks love to propose cutting the budget and then leave out the specifics to avoid being criticized as heartless and cruel. For the next two years it is a dead cinch bet house members will not allow the fiscal hawks to propose additional budget cuts without the specific cuts attached. P.S.- republican fiscal hawks will find their new found allies, house democrats, deserting them and voting against additional cuts they propose next year. Look for the republican fiscal hawk’s influence to diminish considerably next session. The leadership of the fiscal hawks (republicans) are among Governor Jindal’s harshest critics – yet among republican voters – Jindal remains very popular! As far as Governor Jindal and his present lack of popularity – if Governor Jindal had a decent budget surplus available the next couple of years, Jindal or any governor popularity would rebound.
I have not been shy when releasing surveys showing the Governor losing popularity – I point to his cuts to health care and higher education as the reason for his loss of popularity. Governor Jindal is now realizing Louisiana voters like some reform – they do not like lots of reform. Former Governor Edwin Edwards remained popular during his first two terms because he had surpluses galore. His much publicized trips to Vegas were barely noticed by voters. Governor Edwards was not cutting the budget or saving much for a rainy day. With no cash surplus cash available his last two terms – Edwards was anything but popular. Governor Edwards was very likeable, with no cash to throw around even Edwin Edwards experienced a miserable last two terms. No money and budget cuts doomed Governor Dave Treen and the last term of Governor Mike Foster was a struggle. If Louisiana suddenly experienced a hundred and fifty million surplus, lots of legislators, including democrats would be Governor Jindal’s new best friend!

Jindal is term limited. Senator David Vitter is considering running for governor against Lt. Governor Jay Dardenne. John Bel Edwards, a democrat, is also running. There might be others. If you had a crystal ball, assuming Vitter decided to jump into the race, what are your thoughts as to the type of race we would see compared to past gubernatorial elections?
Because Republican David Vitter is currently a US Senator and has the biggest base of republican voters in his corner – how do you not rate his chances as pretty darn good? Unless the state’s finances improve dramatically – why would Senator Vitter give up a powerful US Senate seat to become governor of a state--that is broke? Any Governor of Louisiana is very powerful providing they have money to spend – without a surplus it is a miserable job.

Prime example number one; current Governor Bobby Jindal. . Louisiana has way to many government entities that depend on state handouts. Republican Jay Dardenne is a good solid candidate and has a big base of voters in and around the Baton Rouge Region. Jay Dardenne’s political strength is always underestimated; so far he has never lost any election. Treasurer John Kennedy is another republican statewide elected official running for governor. John Kennedy will pursue lots of the same very conservative voters that are also attracted to Senator Vitter. Kennedy’s challenge is to out republican David Vitter. No one has done that to date.

Republican State Senator Gerald Long comes from Huey and Earl Long country in North Louisiana. He resides in Winnfield which was the seat of power for the Long dynasty. Raising enough money to compete with his fellow republicans will be Senator Long biggest challenge. It has been a very long time since Louisiana had a governor from the north Louisiana, Senator Long hopes to reverse that trend with a big vote from his north Louisiana base. The popular Sheriff of Jefferson Parish Newell Normand is raising money to run for governor. Jefferson Parish and a couple of the surrounding parishes have enough republican voters to make Newell Normand a serious candidate. Sheriff Normand needs to solidify about sixty percent of these voters which would show enough support in governor race polling for Normand to be considered a solid contender for governor.

DO YOU AGREE OR DISAGREE WITH BERNIE PINSONAT'S OPINIONS?  COMMENT ON THEM, BELOW