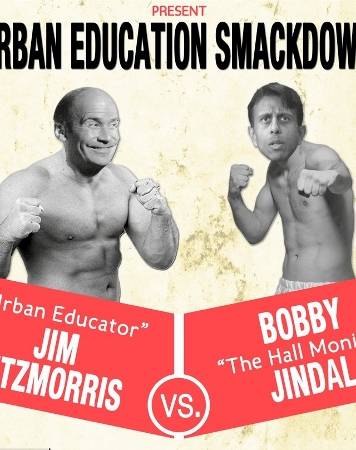 During this past session Governor Jindal and the State Legislature left a legacy of lunacy in regards to education in Louisiana.   Having savaged Higher Education in the state by cutting nearly ½ billion dollars in three years, these same mindful individuals found time to reach down to K-12 and impose much the same level of “dysfunction.”

It will take a few years before the full negative impact of these  “reforms” reveal themselves, but by that time the level of damage to Louisiana’s educational infrastructure will be irreversible.  Public education will be in shambles and private education will be struggling to comprehend why they even took the money when the inevitable proliferation of regulations and reports crash upon them.  It’s like jumping out of a forty-five story building.   For forty-four floors you think you are flying!

More interesting, will be the reaction of the legislature when they discover that once you open the door to granting state money to religious institutions, you have no control over what defines a religion.   That should prove real entertaining to watch.

The problem stems from the fact that the governor and legislature undoubtedly meant well, but they lack a fundamental understanding of just what is happening in today’s classrooms and schools.   State laws created over the years and regulations mandated by the federal government, working in conjunction with failing families and misguided social policies have left schools contending with situations they are wholly incapable of solving.

For a brief but nearly complete crash course in what is wrong and right with teachers and schools, I would strongly suggest that everyone come to “The Shadowbox Theater” in the By-Water and experience Jim Fitsmorris’s verbal outburst entitled “Urban Education Smackdown”. Jim at least spent time in a school and learned something…unlike our leadership.

If those attending believe they arrived to see a play, they are wrong.  This is an emotional and intellection explosion on the part of an educator and gifted playwright on the state of Louisiana’s schools.   Although his diatribe concerns one particular fictional institution called “Plessy Vs Fergerson”…in reality his ninety minute portrait lays bare problems plaguing every inner-city school in the state.

Jim covers so much so well it is impossible to explain in a short article the importance of what he has to say.   See it for yourself if you seek to comprehend education in Louisiana.

The characters are too real and the circumstances too profoundly unsettling to be fiction.  Until and unless theses fundamental underlying social problems are addressed no reforms have hope of achieving significant change.

If you are a teacher, this experience will prove to be especially fulfilling.   For once your frustrations with disruptive students, abusive parents, overwhelmed administrators, mindless government bureaucrats, and clueless elected officials have a voice.

Furthermore, teachers not only receive a discount, but walk away asking themselves Jim’s refrain: “So why, do we do what we do?”

“Urban Education Smackdown” should have been required viewing by all members of the Louisiana Legislator and Governor Jindal before they even began discussing a reform package doomed to fail.   Perhaps if they possessed a better understanding of the problems facing education and educators, they may have developed a greater appreciation and respect for frontline teachers and realized that shortsighted feel-good solutions have little hope of achieving anything.

More in this category: « Hey, Palin, Louisiana should get Alaska's deal or secede from Union Ghost of Loomis, bountygate hangs over New Orleans Saints, Patriots »
back to top